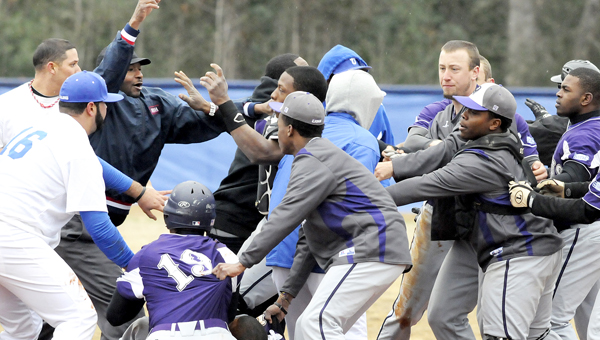 The second game of a doubleheader between Selma University and Paine College ended in a double forfeit after a brawl broke out between the two teams in the third inning. The brawl started when a Paine player thought a tag at third base was too forceful, which resulted in the benches clearing.–Daniel Evans

After all, normal baseball games do not feature sleet, temperatures near freezing and a dugout-clearing brawl.

“Today has been the craziest day,” Holloway said. “This has not been baseball weather at all. Just last week we were out here practicing with t-shirts on and now it is snowing.”

Even Mother Nature had to take a backseat to the brawl that ended the second game. In the third inning, a player from Paine College attempted to steal third base and felt the tag from third baseman Danny Keller was a little hard.

“The guy got tagged out at third and he was upset and he got up and he charged my third basemen and he hit him,” Holloway said when asked to describe how the fight started.

Pushing and shoving started amongst the two players and eventually each team’s bench cleared, creating a wild scene where umpires and coaches stepped in to try to stop the fighting. Once the scene was cleared and both teams were sent back to their dugouts, the umpires called the game, which resulted in a double forfeit, giving neither team the win.

Paine College head coach Kerby Marshall said there was more than just a hard tag that started the fight.

“The play was made on my guy and there was a little extra force on the tag and then some racial comments and vulgar slurs were made to him and my guy reacted,” Marshall said. “It had been going on since the first game. It got out of control [in the] first game of the day in the first inning.”

At the time of the brawl, Paine College led 4-3.

With sleet falling and a mix of rain and snow showers threatening the area, it was unclear whether the game would have been able to finish anyway, but neither coach wanted to see the game end the way it did.

Holloway said his team has a lot to learn.

The second game almost made the first game of the day seem like a boring afterthought, but for Holloway it was a big accomplishment. The Saints won 6-1 behind a fantastic pitching performance from Taurus Harvey.

“It feels good to get that first one under my belt,” Holloway said. “I can breathe a sigh of relief now. Now that we have those first game jitters out, it is time to go and play ball.”

In the opening contest, Aziel Sime drove in Leandro Fernandez and Ladarius Page singled to score David Lee to give Selma a 2-0 lead in the second quarter.

The Bulldogs added two additional runs in the bottom of the inning, with Page and Juan Martinez bringing in runs on singles. Javaris Davis scored seconds later when Paine’s catcher threw behind the lead runner when Martinez tried to steal second. The throw was on point, but Martinez reached second and the throw to home was late, allowing Davis to score and stretch Selma’s lead to 5-1.

Selma added another run in the bottom of the sixth and coasted to a 6-1 win.

Throughout the first game there was some smack talk from each side — whether it be fans or players — and it stretched into the second contest.

Selma led 3-2 after scoring twice in the second inning, but Paine answered with two runs in the third before the brawl took place.