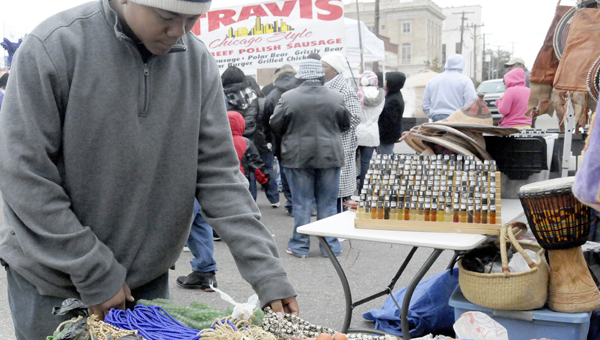 A customer looks through beads at one of the vendors during the 2013 Bridge Crossing Jubilee. Dozens of vendors line Water Avenue during the two-day festival.

Selma residents gathered at the St. James Hotel Thursday to urge the Selma Council to back away from a decision they see as a tremendous threat to local events.

After more than six months of consideration by the Selma City Council, residents finally had their chance to speak up about proposed vendors and peddler’s licenses.

During a public hearing, attendees asked for a break on fees for charitable events, fair pricing methods and better enforcement of ordinances already in place.

Carolyn Cox, who represented Sturdivant Hall, said vendors are already charged a small fee to set up shop at the museum’s annual Artisans Fair and an additional fee may reduce the size of events.

“I really just think it would be a death knell to something like the Artisans Fair or Lunch at the Library where authors come in to sell their books,” Cox said. “It is certainly not a large money making endeavor. We do this to offer a service to the community and give people a chance to show off their work.”

Instead of one fee for each vendor, attendees requested one, blanket fee for events such as Holiday House — a two-week event with dozens of vendors that benefits the Old Depot Museum.

“What if we did some kind of umbrella fee though the non-profit,” said Robert Stabler, who also represented Sturdivant Hall.

One pricing method proposed by Selma City Councilman Greg Bjelke would charge the sponsor of the event, such as The Old Depot Museum for Holiday House, one fee depending on the size of the event.

Attendees were largely in favor of a blanket fee, but said the city should first enforce its current laws.

“If the city would just enforce what is already on the books, I think you would see more money than a $15 or $10 vendor fee,” Selma-Dallas County Historic Preservation Society member Nancy Bennett said. “Before you put in any kind of additional vendor tax, give yourself a year to enforce what is already on the books and go after these minute men that are setting up shop on street corners.”