Selma’s Brantley, Garrett move on to next level 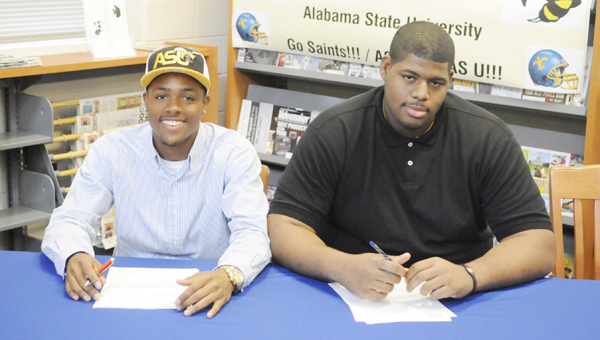 Selma High School’s Davian Brantley, left, and Mark Garrett, right, sign their letters of intent. Brantley will play college football at Alabama State next season, while Garrett will play at UT-Martin. Each player made huge contributions on a Saints team that reached the postseason and finished the year with a 7-4 overall record.–Daniel Evans

Selma had one of its best football seasons in a long time in 2013 and two Saints that played a big part in the team’s success are moving on to play college football.

The Skyhawks sent a coach to visit with Garrett last Tuesday when a snowstorm disrupted travel in the southeast. The coach ended up having to stay in the area overnight after getting stranded because of snow, but Selma head coach Leroy Miles said having a coach make the trip showed how much the school wanted Garrett.

The lineman visited the school last weekend — the only visit he took — and felt at home.

Miles said the Skyhawks were really excited to find out Garrett was signing.

“UT-Martin is so excited about Mark,” Miles said. “They don’t believe he was still on the market, that he isn’t at Alabama or Auburn or one of those schools.”

Garrett had multiple offers. He said Arkansas Pine-Bluff, North Carolina State, Southeast Missouri and Tennessee State were among them.

Brantley’s route to the next level is unique. He had planned on a future in baseball and had not played football in high school before his senior season, but he was named the Times-Journal’s 2013 Player of the Year after a spectacular season that saw him score numerous times defensively and on special teams.

“I really thought I would be signing a scholarship for baseball, but I came out and excelled in football my senior year so I am just going along with the flow. I feel like I can go further in football,” Brantley said.

His baseball career may not be over with either. Brantley said he hopes to also play baseball at Alabama State. When it comes to football, he understands that after not playing in high school until his senior season, his potential may be through the roof.

“I think I’m just getting started,” Brantley said. “I’ve still got a lot of progressing to do, a lot more things to learn.”