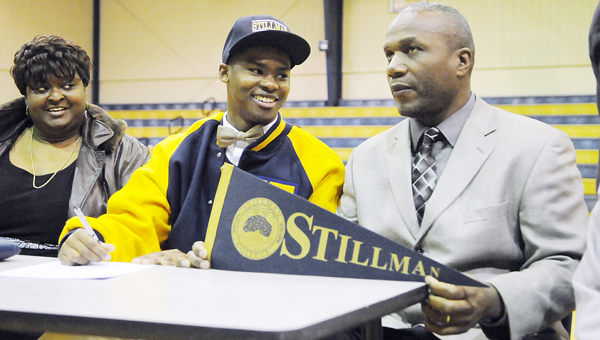 Keith High School’s Maurice Crumpton talks with head coach Harry Crum as he signs the paperwork to complete his letter of intent. Crumpton will play football at Stillman College next season.

Keith quarterback Maurice Crumpton, sporting a letterman jacket he and other Bears’ seniors had been awarded minutes before, smiled as he put on a Stillman hat and started signing his letter of intent to play for the Tigers.

For Crumpton, playing college football had always been his ultimate goal.

Wednesday it became a reality.

“It feels great to do something I’ve always wanted to do my entire life,” Crumpton said after signing his LOI.

The quarterback made it sound like it was an easy decision, based on all the great thingshe said Stillman offers.

“It is a great school,” Crumpton said. “They have great academics, a great football team and great coaches.”

Crumpton, who played on five straight playoff teams with the Bears, scored an incredible 72 touchdowns in his high school career. Keith head football coach Harry Crum admits he isn’t looking forward to trying to replace Crumpton’s stats and leadership, but he is excited for him.

“Stillman is getting a gem,” Keith head football coach Harry Crum said. “They are getting a jewel in Maurice Crumpton.”