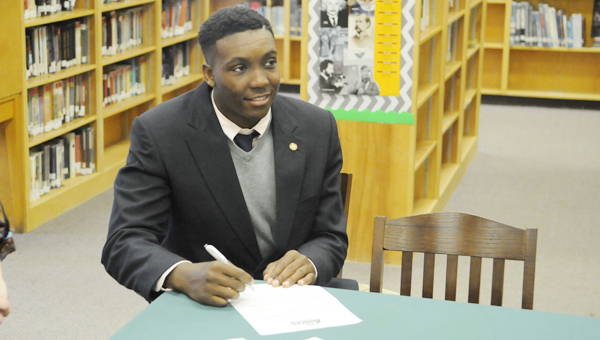 Dallas County tight end Justin Chandler had to talk his mom into letting him play football for the first time during his eighth grade year of school.

Wednesday it paid off when he signed to play college football at Faulkner University.

“Nobody can ruin my day right now. That’s what it feels like,” Chandler said just seconds after signing his LOI.

Dallas County head coach Barry Colburn said Chandler has every attribute a team looks for in a tight end.

“He’s the total package as a tight end,” Colburn said. “He can block and then also get off the line and make catches.”

Chandler is an accomplished student athlete. His resume looks more like the paperwork of someone with a long history of success in the workforce than a high school senior. He’s Dallas County High School’s Beta Club President as well as SGA President. He was also awarded one of the Selma Quarterback Club’s four scholarships, just to name a few of his accomplishments.

“The classroom always comes first., Chandler said. “You are a student-athlete so you have to go in the classroom and then on the field.”