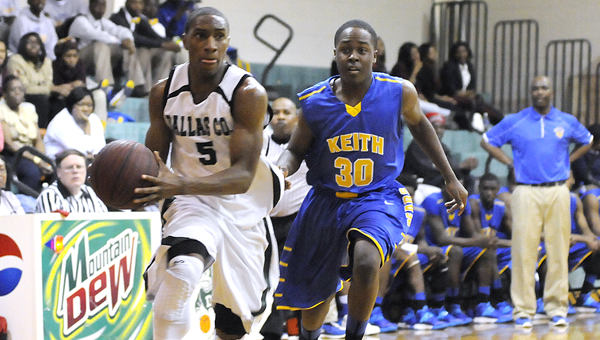 The game was tied 20-20 after the first quarter, but the Hornets made three consecutive three-pointers to begin the second period and started to distance themselves from the Bears.

Even in the win, Dallas County head coach Willie Moore was unhappy with the overall game.

“To be honest with you, we accomplished nothing other than playing the game,” Moore said. “We didn’t accomplish anything, either team. It was a poorly played game on both team’s part.”

It was Dallas County’s senior night and Lee, the reigning Class 4A Player of the Year, put on a show in his final regular season home game. Lee scored 10 points and had six rebounds in the first quarter alone on his way to a double-double.

In all, the power forward scored 13 points and added 17 rebounds.

But it might have been Moorer, a junior, who made the biggest difference in the game. After missing his first five three-point attempts — most of them wide open looks — he drilled his next three attempts and turned a tied game into a big Hornets’ lead in the second quarter.

“I just want him to keep shooting the ball,” Moore said. “He has the green light to shoot it.”

Keith head coach Tommy Tisdale was unhappy with the way fouls were being called and at one point had his team — trailing by 14 in the third quarter — hold the ball for over a minute as time ticked off the clock to prove a point to the officials.

“I literally said to my assistant coach before I told Walton (Young) to stall,” Keith head coach Tommy Tisdale said. “My words to him was ‘If they are not going to let us play, then we are not going to play’ and that’s what I told [him].”

Although the game turned into the emotional county rivalry game most expected, it started with a great show of sportsmanship from both sides. Hornets senior B. J. Leshore, who tore his Achilles in Dallas County’s game at Selma High School earlier this season, started the game was given a free basket so that his career did not end on an injury.

“I think because of the class coach Tisdale showed allowed us to put him in the game without him being in any danger of being hurt or harmed,” Moore said.

“It allowed him to walk off the floor with his head held high and a standing ovation from both sides.”

In return, the Bears were allowed a layup to tie the game 2-2. From there, things got interesting in a hurry. The Hornets jumped out to an 11-3 lead behind six quick points from Lee, but Keith rallied with a 17-2 run to take a seven-point lead in the first quarter.

But the Hornets stormed back and Moorer found his shot on the final attempt on the first quarter, beating the buzzer and tying the game as the opening period ended.

The second quarter started with a barrage of three-pointers from the Hornets and Keith was unable to keep pace, falling behind 39-30 at the half.

Dallas County scored the first five points of the second half and Tisdale told his team to hold the ball in frustration, feeling the majority of calls were going against the Bears.

Once play picked back up again, Dallas County’s Lowell Furlow started making his presence known, getting deep position and banking the ball in off the glass for easy score after easy score. Furlow scored 10 points in the game, with all of those points coming in the second half.

At the end of the third quarter, Dallas County led 51-35.

Both teams played their substitutes in the fourth quarter and the game lagged a little, ending in an 18-point Dallas County win.

Keith is hosting the Class 1A, Area 5 tournament, which begins Tuesday with a game that will decide who plays the Bears Friday night at 8 p.m.

Dallas County is hosting the Class 5A, Area 6 tournament and will play the winner of Tuesday’s Holtville and Childersburg game at 7 p.m. Friday.

Monday’s game was originally scheduled for Jan. 30 but snow and ice showers forced the game to be postponed.