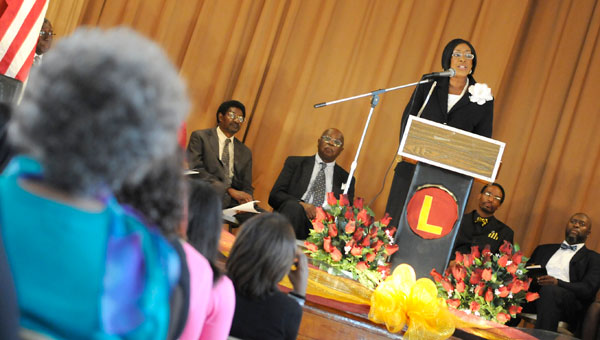 MARION — Alabama State University’s new president believes the school must look at the positive aspects of its past to move past previous controversy.

Boyd officially assumed her position as president of the embattled university on Feb. 1. Prior to her tenure, ASU was the subject of a state investigation that alleged financial waste and fraud. Previous president Joseph Silver resigned in Dec. 2012, 13 weeks after assuming the position.

In her speech, Boyd focused on the university’s roots in Marion, saying the school has to focus on the positive aspects of its history to move forward.

“You were faithful in planting the roots here in Marion and now look at the product,” Boyd said. “It’s always important to celebrate the founders who had the courage and the tenacity and the persistence to do what they were called to do. It is our responsibility today to remember that yes we have come a long way, but we still have a long way to go.”

She continued, saying the best way to incorporate history into improvement is by focusing on positive accomplishments.

“If you don’t understand your history, the things that were negative may be repeated,” she said. “But the positive parts of your history you want to shout from the rooftops. We cannot lose our fight. Nobody told us that the road was going to be easy.”

After the speech, Boyd said she didn’t originally intend to address the university’s previous wrongdoings, but believes focusing on positive aspects of history is one way to move into a new era at Alabama State University.

“We have to be inclusive and transparent and stand in absolute credibility for moving us forward,” she said. “With all of the things that have happened, we now need to make sure to take the next step and move past that and continue to educate these young people.”

Some of her goals for improving Alabama State University include establishing an engineering school and improving the quality of the university’s science, technology, engineering and math curricula.

“I’m unashamedly a promoter of STEM and think that’s one positive way to push the school forward,” she said. “I would also like to increase our enrollment to perhaps 7,000 or 8,000. We have room to grow, but we just have to make it happen.”

In 1878, Lincoln Normal School’s second president William Paterson helped move the school from Montgomery to Marion. The school’s new campus opened in 1887 and was renamed the Normal School for Colored Students.