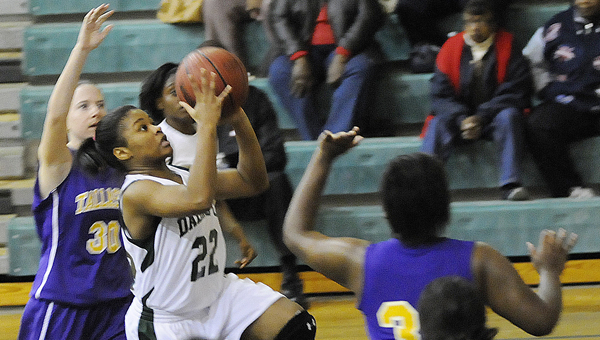 Dallas County’s Casmisha Moore goes up for a shot during the Hornets game versus Tallassee last week. The Lady Hornets will play their first postseason game Monday against Holtville at Childersburg High School. The Lady Hornets are the No. 4 seed in Class 4A, Area 6. –Daniel Evans

This upcoming week promises to be full of basketball action, with nearly every team from Selma-Dallas County continuing or starting postseason play.

Four local teams will host area tournaments. In boys basketball, No. 1 Dallas County and No. 4 Keith will each host their area tournaments and will play their opening games Friday. The Hornets and Bears will actually match up Monday night for a final regular season game, where two top five teams will tangle.

But postseason play is really all that matters now.

If anybody knows his way around the postseason, it is Selma head coach Woodie Jackson, who has won six state championships. Jackson’s Saints are the No. 2 seed in Class 5A, Area 6 and will play Greenville in the first semifinal at Sumter Central High School Friday, Feb. 7.

Jackson said he talks to his team all of the time about this time of the year, where a loose ball here or there could be the difference between advancing or seeing a season end.

“[You can take it] only one game at a time and any given night anybody can win,” Jackson said. “You have to go out and put your best effort out and if you get a bounce here or there you have a chance even against the Miami Heat.”

As far as local girls teams are concerned, Selma and Keith will host area tournaments and will play for the first time Thursday.

Other teams have a little bit of a tougher trip past area tournament play, where the top two teams from each area tournament will advance. Southside’s boys and girls are the No. 2 seed in Class 3A, Area 2.

Southside girls basketball head coach Jason Bothwell is already looking at things he can take from previous games and use in the postseason.

“We are just trying to add a different component of pressure defense,” Bothwell said after Southside’s win over Ellwood Christian Friday night.

“The better the pressure defense we play on down the line into the playoffs, the better off we will be because we will be able to generate points on both sides of the ball.”

Dallas County’s Lady Hornets will play Monday, Feb. 3 in a first round area tournament game against Holtville at Childersburg High School. The Hornets’ girls are looking at a lot of travel if they win their opening game.

“You are talking about going on the road twice for almost a two hour drive,” Dallas County girls basketball head coach Charles Thompson said after the Lady Hornets game Friday. “Coming off of Friday … That’s a lot.”

Ellwood Christian is also looking at a stiff challenge to advance. The Eagles’ boys and girls teams will play at Keith next week in Class 1A, Area 5 play.

On the AISA side, Morgan Academy and Meadowview Christian are guaranteed spots in the Elite Eight at Huntingdon College. The Trojans boys and girls will play their Elite Eight game Feb. 5, although times have not yet been announced because the Class A, Region 2 tournament is still being played out this weekend.

The Morgan boys will play their Elite Eight game Feb. 7. The Senators are still playing this weekend at Fort Dale Academy in their regional tournament, which will affect their seeding and the time they will play next week.

The Lady Senators season is complete after losing in the first round of the regional tournament.

Postseason play in basketball is different than many other sports. Even teams that are winless have an opportunity to advance and make a miracle run to a state championship, so Jackson says teams have to throw records out the window.