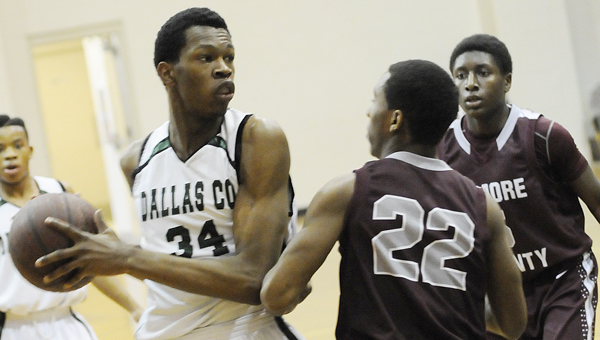 Dallas County power forward William Lee played in his first game in over two weeks in the Hornets’ win over Elmore County.

The No. 1 ranked Dallas County Hornets (21-3) did not look like a team that hadn’t practiced in almost a week in Friday’s 68-26 win over Elmore County.

This week’s snow and ice precipition had kept Dallas County off of the practice floor most of the week. The Hornets had not practiced since Monday and head coach Willie Moore was concerned that the lack of preparation might result in a lackadaisical performance form his team, but instead he was impressed by one of Dallas County’s most complete games of the season.

“We wanted to come out and not be complacent and we accomplished everything we wanted to accomplish,” Moore said.

The Hornets jumped out to a 27-6 lead after the first quarter. Scott Cole finished off the quarter with back to back three-pointers, turning a 15-point game into a blowout.

“We were pretty focused early on in the game,” Moore said. “It was an area game and we wanted to finish the regular season area play undefeated so it was important for our guys to do that. We talked about having some composure early in the game and being focused and I felt like we were very focused the first ten minutes of the game.”

Elmore County was unable to score the ball consistently against the Hornets suffocating defense, which got a boost due to the return of 2013 Class 4A Player of the Year William Lee.

“They have a really good team, a really good team in all phases of the game,” Elmore County basketball coach Wilbur Terrell said. “Defensively, offensively, everything. They are going to be a formidable opponent for anybody in 4A. I look for them to go all the way.”

Dallas County fell to Elmore County 44-21 Friday in an area game that left the Lady Hornets in third place in Class 4A, Area 6.

The Hornets trailed 21-9 at halftime and 29-16 afterr three quarters.

“It’s like we told the girls, there’s no way you can win a game with 27 turnovers,” Dallas County head coach Charles Thompson said.

The Lady Hornets had a lot to play for in the game, one of the reasons Thompson was disappointed with his team’s performance.

“We were fighting for the No. 3 seed and we made that clear and we came up with our gameplan accordingly,” Thompson said. “Today we just didn’t go out and execute like we knew what was on the line.”