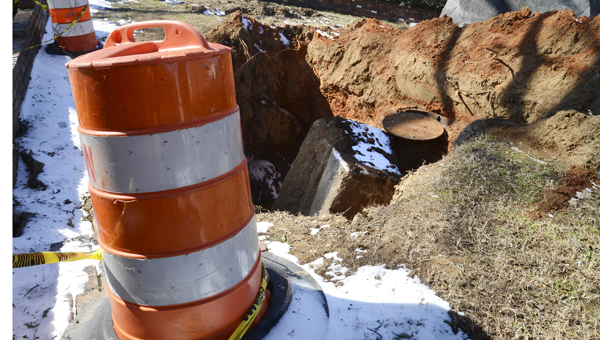 Work to uncover the cause of sinkhole under Selma’s Bienville Park hit a snag this week as workers’ progress has been blocked by a large piece of concrete that had previously served as the base for the park’s stone monument. (Jay Sowers | Times-Journal)

By Jay Sowers and Josh Bergeron

Work to fix a Bienville Park sinkhole hit a few snags this week, but the city’s engineering consultant and a city councilman impact the timeline for the project’s completion.

Ray Hogg, owner of Hogg Engineering and engineering consultant for the City of Selma, said a large piece of concrete that had previously been the base on which the park’s large stone monument once stood, had fallen into the hole and obstructed the view of the underground storm drain.

“The city does not have a big enough piece of equipment, they have a small back hoe, and there is a huge piece of concrete down in the hole that I guess was the original base to the monument. That has to be lifted out of the hole first,” Hogg said. “I have found someone who does have the equipment that can get down there pretty quick.”

During Thursday’s Selma City Council meeting, Ward 3 Councilman Greg Bjelke agreed to pay $2,500 for the work, an estimated amount needed to lift the concrete block out of the sinkhole., with oil lease money he has on hand.

Hogg said the $2,500 is an “up-to” amount, meaning that the construction company he contacted to fix the sinkhole cannot exceed the estimate.

Oil lease money is distributed annually to counties and municipalities. Each councilman receives a designated amount to use on certain types of projects.

Hogg said after looking over the sinkhole earlier in the week, he feels the problem with the storm drain could be much smaller than what was initially feared.

“We looked in there, and at this point it’s really hard to determine the exact problem, and we won’t know for sure until we do some more digging, but we think the problem is limited to the area at the man hole,” Hogg said. “Hopefully the solution is to patch it or pour some concrete around it.”

Hogg said the problem could have developed where the drainpipe intersects with the brick manhole, and would have grown steadily larger over time.

“Many times that is where you can have a hole develop over time or a little small crack,” Hogg said. “Dirt will go in there, and finally over a period of years you’ll have a big enough cavity and eventually you’ll have a problem like this.”

Selma City Council member Greg Bjelke has also inspected the hole, and he too thinks the issue will be isolated and easy to resolve.

“From what we saw, it was not major, meaning going up Lauderdale Street,” Bjelke said.

“It really looks like an isolated area right there by where the monument used to stand. Whenever you think something is simple, it comes outs to be difficult. But I’ll keep my fingers crossed.”