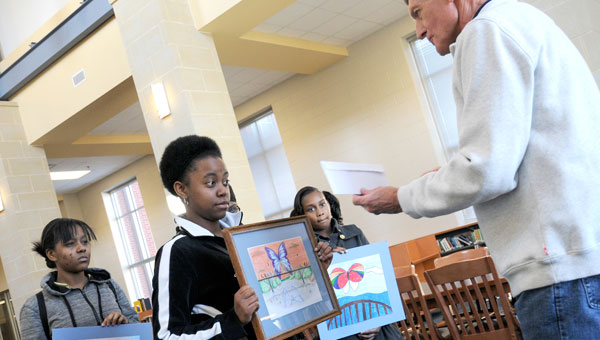 Four Dallas County students were honored for their artistic talents as a part of the Butterflies and Bridges Run Art Contest.

Selma High senior Aliyah Peterson was named the overall winner. As a result, her artwork will appear on the official shirts for the run. She also received a $100 prize.

After winning, Peterson described how she came up with the design, which depicts one large butterfly behind the Edmund Pettus Bridge and several smaller butterflies running across the bridge.

“I wanted to include different colors from different butterflies across the world,” she said. “With the larger butterfly, I pictured the monarch butterfly overall, but wanted to put in my favorite colors. The reflection also means a lot to me; it’s reflecting how beautiful it is on the water.”

As a senior, Peterson’s time in high school is quickly coming to a close. Peterson said she would like to pursue a career art or design after graduation.

Event organizer Bill Potter said participation in both the run and art contest has increased in recent years. As a result of increased participation, more money is donated to sports programs at Selma City Schools. Last year, the run registered 198 runners and raised approximately $4,500. It was the biggest year in the run’s history and a significant increase from the first year, when approximately 30 people registered.

“We usually have about 100 participants, but last year was a real big year, in part because we had a lot of high school students signed up,” Potter said.

Selma High Athletic Director Patrick Evans said the money is used for anything relating to sports, but is usually used to purchase uniforms or pay for summer camps.

“We thought it was a great way to raise money for our sports departments,” Evans said. “We were really trying to draw people to our city and better the school system. It involves multiple parts of our school system too, not only the athletic side, but also students that are interested in art as well.”

The 8K race will take place on April 19 at 8 a.m. It will start at Selma High and snake through downtown Selma, until runners reach the Edmund Pettus Bridge. The race turns around after reaching the bridge and heads back toward Selma High. A 2-mile run will also be held on April 19 as a part of the run.