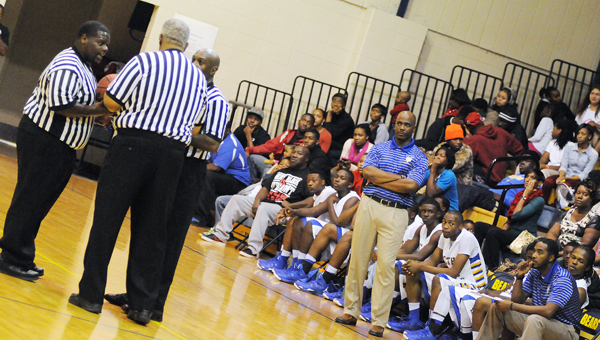 Keith head coach Tommy Tisdale waits to see what referees are going to call in a game earlier this season. The Bears and all other teams within Dallas County have been unable to play their scheduled games this week, due to the icy and snowy conditions on area roadways.–Daniel Evans

Local children have enjoyed the snowy and icy precipitation that fell in the Selma-Dallas County area Tuesday, but the weather has given high school basketball coaches a major scheduling headache.

“We are looking at now possibly not playing somebody,” Keith head coach Tommy Tisdale said. “Who I don’t know because I haven’t talked to Dallas County or Francis Marion.”

The Bears were scheduled to host area rival Billinglsey on Tuesday, Dallas County Thursday and Francis Marion Friday. Since the game against Billingsley is an area game, under AHSAA rules it “must be re-scheduled on the next available date”, meaning the next time Keith is in school — which appears to be Friday — the game must be played.

Dallas County’s situation is a lot like Keith’s. The Hornets were scheduled to host area rival Elmore County Tuesday, Keith Thursday and John Essex Saturday. Head coach Willie Moore believes the Hornets will end up playing Elmore County Friday at 1 p.m. during an in-school contest that students likely will not be able to attend. From there, he has no idea what his schedule will look like.

“It is pretty chaotic but I am not going to worry about it because it is beyond my control,” Moore said. “The weather is an act of God.”

Moore did admit that he hates the time off. The Hornets have not been able to practice since Monday and have not played a game since an in-school contest against Tallassee last Friday.

“This is the worst time of year to be experiencing this inactivity because a lot of schools have aspirations of playing for an area championship, region championship and state championship and in order to do that you need to be playing your best,” Moore said.

Other schools are in better shape.

Selma High School’s game at Demopolis High School has been moved until Friday.

Southside High School does not have a scheduled game during the middle of the week. The Panthers next scheduled game is versus Ellwood Christian Friday. The Eagles were scheduled to play A. L. Johnson at home Tuesday and on the road Thursday.

On the AISA side, Morgan Academy’s region tournament at Fort Dale was postponed from Thursday and will start Friday and run through Sunday. The Senators’ boys will play Bessemer Academy Friday at 2:30 p.m. The Lady Senators will take on Kingwood Friday at 4 p.m.

Meadowview Christian’s boys and girls varsity teams are scheduled to play Sumter Academy at the University of West Alabama in the Class A, Region 2 tournament.