Region continues to dig out from winter storm 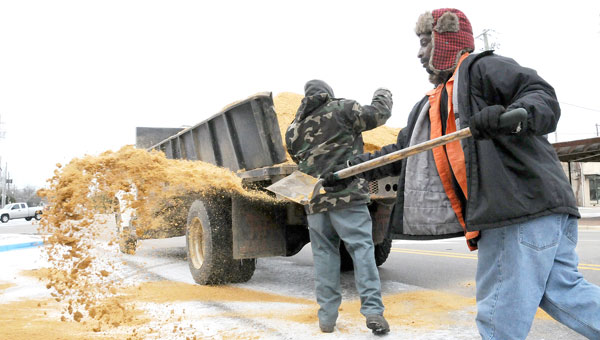 Selma Public Works employee Marvin Lewis spreads sand over the roads near the St. James Hotel on Wednesday, one day after a snow storm rolled through Selma. (Josh Bergeron | Times-Journal)

Selma and Dallas County streets were noticeably quieter Wednesday as schools, business, government buildings and even the post office closed because of winter weather.

Tuesday’s winter storm dumped a total of one inch of snow and ice on the Selma area, according to the National Weather Service in Birmingham. The snow forced the closure of county roads. Selma Police also blocked off specific problem areas.

Dallas County Probate Judge Kim Ballard said it was the worst winter weather he’s seen in more than a decade.

“The last time I can remember weather this bad was in the 90s, maybe it was 1990,” Ballard said. “The roads were almost impassible. This storm comes close, but I actually think the one in the 90s may have been worse.”

City and county road crews began sanding roads early Tuesday morning, with a focus on bridges, as snow and sleet fell. Temperatures dropped into the teens Tuesday night and remained below freezing for most of Wednesday, meaning ice remained on some bridges and roadways.

“I know that we had to sand some areas several times because the sand would get glazed over,” Ballard said. “Our first concern was bridges, but we also sanded roads as we got calls about areas that were particularly bad.”

Selma Public Works director Tommy Smith said his department used approximately 40 tons of sand and 300 pounds of salt on the city’s roads Tuesday and Wednesday. He said the city used one salt-spreading truck, borrowed from the Central Alabama Farmers Co-Op, and a dump truck, filled with sand.

“Because there wasn’t a large number of people on the roads, traffic was kind of slow and we were able to get out and do our job pretty easily,” he said. “It’s unusual for us to stockpile large amounts of salt, but we have a decent amount sand because we use that all the time. This is the first year I can remember that we actually put salt on the bridges.”

The biggest problem area for accidents was the U.S. 80 overpass, according to Selma Chief of Police William Riley. Though, Riley said no fatal accidents were reported in the city limits.

“We had several accidents that occurred because of ice,” Huffman said. “I would call a majority of them fender benders, but some of the accidents may have totaled the vehicle. I’m just as worried about (Thursday) morning as the past few days because the weather is going to stay just as cold.”

Approximately 20 accidents occurred in Selma and Dallas County, he said.