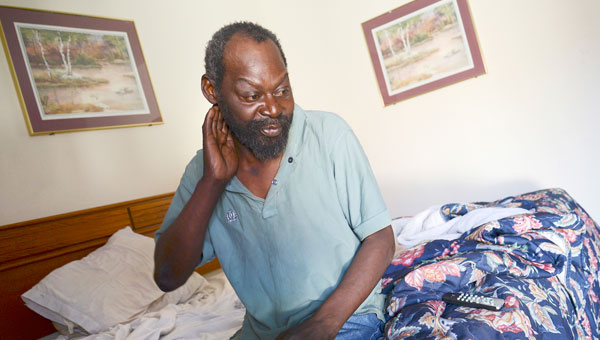 James Harrison looks around his hotel room at the Budget Inn last week. Harrison, who is homeless, was among the many people who had a room at the hotel reserved and paid for by the Edmundite Missions. (Jay Sowers | Times-Journal)

The unseasonably cold winter weather in Selma has been hardest on those with out the luxury of a heated home and a warm meal, but those in need have not been forgotten by one local Catholic organization.

James Harrison is one of the beneficiaries of the year-round work of the Edmundite Missions, who recently arranged for him a room at the Budget Inn on Highland Avenue in Selma.

Harrison sat on his queen-sized hotel bed recently, not far from the electric heater, which was running all out, as he flipped channels on the television, reflecting on how much the group’s generosity means to him when the temperatures dip so drastically.

“I’m actually homeless, I’ve got no heat, so it’s a very good thing for me,” Harrison said. “It’s been freezing, especially when you are living in a vacant house with no heat.”

Harrison said the generosity of the Edmundite Missions, as well as hotel management, has been heartwarming to both him and others he knows who have been aided this winter, as well as in past years.

“I’ve been going there to eat for a long time, probably about 20 years,” Harrison said. “And there are a lot of people who have no heat. Me, myself, I’ve got no income coming in and it’s a great thing, what they do. It’s really beautiful.”

Budget Inn manager Jim Patel said there have been several times already this winter when the missions have paid for rooms for homeless people in need of a warm room for the night, something Patel finds admirable.

“They have no heat and the temperature is very low, and it’s very good to see everything the church is doing to help these people,” Patel said. “I really appreciate the efforts of the Edmundite Missions, and I am happy to give them a discount because I am trying to do my little part to help them out.”

Bradford Perry, Director of Nutrition at the Mission’s Bosco Food Kitchen, said help from Patel and the Selma Police Department has allowed the organization to assist more people during the lengthy and frigid winter.

“We have an arrangement with the police department that if they have people they come across at night, they can call the Budget Inn and make sure they can take them up there,” Perry said, “We’ve made arrangements with Mr. Patel, who’s been very good to us, to block of rooms for when the temperatures dip. He’s a wonderful man, and I don’t know what we’d do if he wasn’t there.”

Along with finding temporary housing during recent Arctic spells, Perry said the organization serves roughly 800 meals a day at the kitchen and delivers another 50 meals a day seven days a week to needy residents who otherwise couldn’t get the food they need to survive.

“We expect those numbers to grow because there is such a need here,” Perry said. “And I think we are the only ones that are doing anything as far as getting shelter for these people, and that’s important.”

Chad McEachern, President and CEO for Edmundite Missions said the frigid temperatures have only accentuated the need for food and shelter that exists in Selma.

“The need is always there,” McEachern said. “I don’t know if we’ve ever experienced this severity of families and folks needing help. But the more disturbing part was that there was we are not aware of other organization responding to this, so I thank God we were that open door to folks.”

McEachern said the need for shelter has been so great lately that he personally has taken several people to the hotel.

“No other agency was opening or had anything available, so when all the polar vortex stuff was coming in I picked up three guys I knew on that Sunday night and took them to the Budget Inn, and the next day it was just an onslaught,” McEarnern said. “We had so many individuals and families and folks who just don’t have heat.”

He said community members interested in helping the Mission are welcome to drop of donations at the organization’s administration building located at 1428 Broad Street in downtown Selma.

“Cash is always helpful, because we are paying for rooms and food and things like that,” McEachern said. “But also need the basics; like blankets and warm coats.”

More information about donating to the Missions can be found by calling their offices at 334-872-2359 or via email at Information@EdmunditeMissions.org.

Madge Minter carries her inflatable sled up the hill in front of her family’s Selma home on Tuesday afternoon while... read more