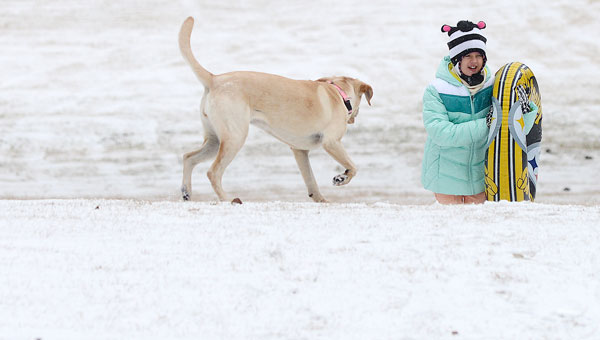 Madge Minter carries her inflatable sled up the hill in front of her family’s Selma home on Tuesday afternoon while enjoying a day off school. (Jay Sowers | Times-Journal)

For some, the snow Tuesday brought a fun time of snow sledding, for others it was clear sign that staying inside was best idea and one Selma resident described it as “the worst day ever.” While reactions differed, all could agree that the frosty weather was an unusual occurrence for Selma.

CT Wireless sales manager Cameron Coleman was sporting a puffy jacket, gloves and scarf while surrounded by three heaters as she assisted customers at the Broad Street store.

Selma native and resident Coleman, who said she is not fan of the cold weather, didn’t expect to work Tuesday but was later informed that she must. She said only seven customers had arrived since she started work at 11 a.m.

“I’m miserable,” Coleman said. “I have about three pairs of pants and three shirts on. I wanted to stay in my bed and not get up at all.”

While Coleman was far from loving the weather, a group of children were enjoying the snow, as they raced down hills at their home on sleds and inflatable rings.

Madge Minter, 7, said she was enjoying her day away from her second grade classroom at Morgan Academy.

“I was very excited to be out of school,” Minter said. “It’s fun to play in the snow.”

Minter’s older sister Gilley said she had also enjoyed playing in the snow, but the unseasonably cold temperatures had curtailed the family’s fun at a few points.

“We made snow angels earlier,” Gilley said. “But it didn’t last long because it was so, so cold.”

Selma resident Viola Evans said she is most definitely not a fan of the arctic weather that settled over the Black Belt Tuesday.

“It is the worst day ever, and I am not a fan of snow,” Evans said while filling her car with gasoline at the Murphy USA gas station Tuesday.

Evans, who works at Cedar Hill Assisted Living Center, said she was prepared to stay late, or overnight at work if the road conditions worsened.

“I still have to go to work and I packed a bag because I might just have to stay there all night,” Evans said.

For Selma resident Annette Williams, an Indiana native, the snow was far from a new experience. She said the snow falling in Selma is nothing compared to what she has endured in Indiana.

“That’s kind of sort of funny to me, but at the same time I understand that if you are not used to driving to it,” Williams said. “I would stock up too, because everything is closing down, and you had to be without something that you might possibly need.”