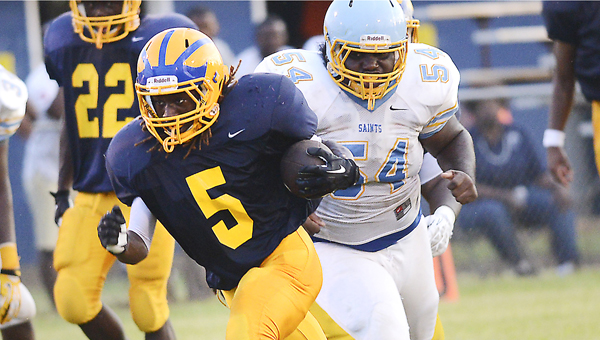 Keith and Selma will play for the 19th time in 2014. The Bears have only defeated the Saints one time in their history. Keith will also play Southside in a non-region game.–File Photo

When the Alabama High School Athletic Association announced its new classifications last week, the discussion focused on who local teams would be matched up with and how far they would have to travel.

Now, the focus has shifted to non-region scheduling.

After the new classifications were unveiled, Dallas County Schools Superintendent Don Willingham spearheaded a movement to get every local school to play one another.

“All of them have so much trouble [with scheduling] and money is so tight that if we’ve got some local teams we can play, especially within our own district, to create some rivalries I think that is important,” Willingham said.

Willingham said he encouraged schools to prioritize playing local teams first and to let him know if they had any trouble. Now that many of the local schools know their non-region opponents for 2014, it’s fair to say that the movement was successful.

A lot of old rivalries return, like Southside versus Selma, and a lot of non-existing rivalries have been renewed.

Dallas County and Selma, two schools that have not played one another since 2007, will meet for the fifth time since 1935 when they take the field at Memorial Stadium in 2014.  Selma leads the all-time series 14-2.

Keith and Selma will also play a regular season game for the first time since 2001, after participating in jamboree games against one another in recent years. Selma leads the all-time series 17-1, with the only Saints’ loss coming in 1997.

“With just playing six region games and playing in a seven game region, it gave us four non-regional games and we were able to get Southside, Dallas County, Keith and Ellwood Christian involved so that we can play teams in our area,” Selma head coach Leroy Miles said. “It’s almost like we can have our own little city championship.”

Miles said playing all of the local schools will be great on reducing travel costs for all of the area schools.

Selma has won nine consecutive games against the Panthers, dating back to 2005. Ellwood Christian and Selma started playing two years ago when the Eagles made the jump from AISA to AHSAA.

Other rivalry games were unable to be happen, because some teams play in a eight team region, limiting them to only seven non-region games.

One rivalry that was not able to be scheduled was Dallas County versus Keith. The Hornets and Bears have not met since 2007. Keith won the last meeting, but is 3-30 all-time versus Dallas County.

“I hate that. I really do because that is a game the fans wanted to see,” Keith head coach Harry Crum said. “We need that rivalry.”

Keith was able to keep its rivalry with Southside. The Bears and Panthers have played every season going back to 1976 and the all-time series is tied 20-20.

Keith will also face area rival Ellwood Christian in a region game, just as the Bears have the last two seasons. The series between the two rivals is split 1-1.

Southside and Dallas County were also able to keep their rivalry game intact. Despite leading the all-time series 29-16, the Hornets have lost three straight to Southside.