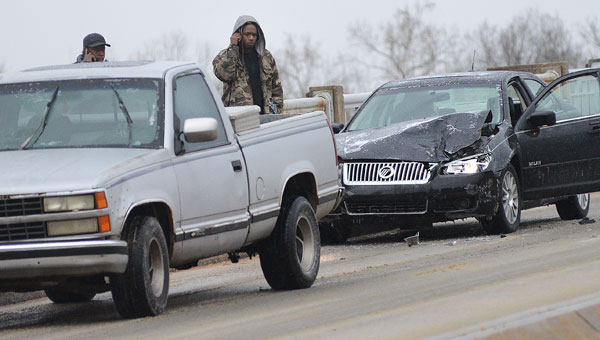 Two motorists look over the damage to their vehicles following an accident Tuesday morning on the
Edmund Pettus Bridge. State highway crews worked throughout Tuesday trying to keep sand on the bridge to prevent a build up of ice. (Jay Sowers | Times-Journal)

Winter weather closed roads and caused traffic problems for some motorists in Dallas County on Tuesday.

A news release from the Dallas County Emergency Management Agency, said roadways had begun to ice over and “travel is considered unsafe at this time.”

“There’s no one area that’s worse than another,” Dallas County Engineer Coosa Jones said Tuesday afternoon. “It’s bad everywhere. Instead of just the bridges, everything is icing over.”

Emergency Management Director Rhonda Abbott said she was unsure if county roads would also be closed Wednesday, but said road conditions are not likely to improve overnight.

“We’ll assess the road conditions (Wednesday) morning, but we aren’t expecting anything to change.” Abbott said.

“It’s been relatively quiet,” Stokes said. “We had a couple of traffic accidents that were minor, but nothing major and hopefully we won’t have anything major.”

Selma Chief of Police William Riley said most of the car accidents were outside of the city limits.

“If you do not have to be somewhere, there is no need to come out,” he said.

Gov. Robert Bentley also urged residents to avoid roadways in a press conference Tuesday afternoon. He also said the loss of power because of the winter storm has been minimal.

“This is a very dangerous situation,” Bentley said. “People need to stay home. If you have an emergency, dial 911.”