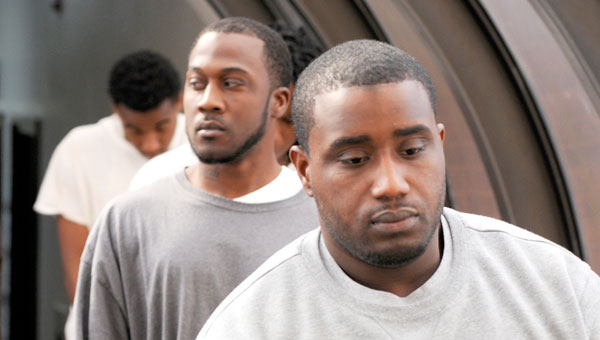 A Selma resident, charged with murder, will remain in custody a bit longer after District Judge Bob Armstrong decided to temporarily leave the suspect’s bond revoked.

David Johnson III, owner of 80 Racks Clothing, allegedly shot and killed a customer following a verbal and physical altercation on Jan. 17. Johnson posted a $100,000 bond on Jan. 22 and was released. Authorities later revoked the bond after discovering charges were pending against Johnson in a separate, 2013 assault case.

The district attorney’s office said the alleged murder violates the terms of Johnson’s bond on the 2013 incident because the assault charge is still pending.

“The first time he pistol-whipped someone,” Assistant District Attorney John Groos said during Monday’s hearing. “The second time he killed someone. What is next?”

Johnson’s lawyers argued the opposite and say the murder doesn’t violate bond for the 2013 assault because the defendant in the assault decided not to pursue charges. Although, the case has not been dismissed.

“Mr. Johnson has his glasses slapped off of his face,” Selma-based lawyer Tommy Atchison said. “We believe that the incident was a case of self-defense and believe it does not violate the terms of the bond on the assault.”

Armstrong said he would review evidence, presented in court Monday, and make a final decision on the bond revocation in the coming days.

Selma Police investigator Evelyn Ghant described details of the Jan. 17 murder case in court Monday. Witness statements said the incident began when Johnson got into an argument over the victim Tarrence Effinger’s appointment at the barbershop inside of the business.

“One of the witnesses said she grabbed her child because she thought the suspect and the victim were going to fight,” Ghant said. “When she grabbed her child and walked toward the door, that’s when she heard the first shot. When she heard the first shot, she turned around and that’s when she noticed that Mr. Johnson was over Mr. Effinger and shot him in the back.”

Once Armstrong makes a decision on whether to revoke bond on the 2013 assault, a second bond hearing may be held to raise bond on the murder charge.

Weida Sheehan is preparing to run for tax assessor for the first time, but she isn’t a rookie at the... read more