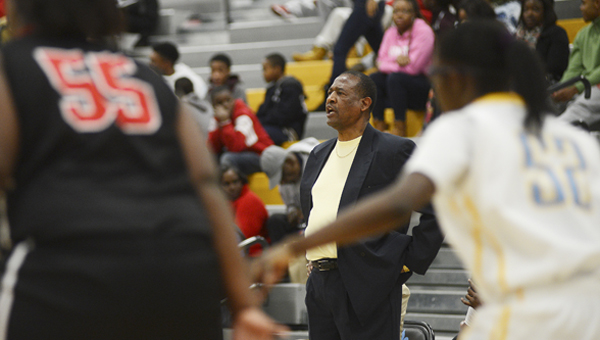 Selma girls head coach Anthony Harris looks on as his team takes on Sumter Central. The Saints have won 20 or more games for eleven consecutive seasons, but the Lady Saints have never won a state championship. –Jay Sowers

It isn’t everyday when the coach of a 20-4 basketball team isn’t sure who his best player is, but that’s the case for Selma girls basketball head coach Anthony Harris.

Harris isn’t even 100 percent sure who the Lady Saints’ leading scorer is either, because his team is so balanced that it regularly plays ten players and sees its scoring evenly distributed.

“You’ve got about six girls on any given night that are going to rise to the occasion,” Harris said about his team’s even scoring output.

He estimates Ayana Moore, Areyana Williams and Jamya Smith all sit right under averaging ten points per game for the Saints.

The Saints only have three seniors: Moore, Brenna Porter and Takeesha Wilson. Williams and Smith are freshman and so is Jacquetta Dailey, who gets a lot of playing time. The Saints’ youth movement has become the story of Selma’s season.

“We have some young people stepping up,” Harris said. “Last year, we didn’t have an outside threat. This year we have good defense.”

Selma has won eight straight games and debuted in the ASWA state basketball rankings this week for the first time all season at No. 8.

But success isn’t new to the Lady Saints. Friday night’s win over Sumter Central gave Selma its 11th consecutive season of at least 20-plus wins.

However, despite a lot of recent success, the school is still chasing its first state championship.

In 2007-2008 the Saints reached the state semifinal but lost despite entering with a 32-0 record.

In Harris’ eleven years as head coach of the Saints, Selma has gone 278-67.

This season 13 of Selma’s 20 wins have come by over 20 points. Selma has not lost a game outside of tournament play all season, but tournaments haven’t been kind to the Saints. Selma’s four losses came in the Hoover High Tipoff Tournament, Selma’s Thanksgiving Tournament and the Dwight Madison Round Ball Classic just after Christmas.

Harris said before the season his team outlines its goals.

First is to host the area tournament.

“We try to take it one day at a time,” Harris said. “We know we have to go through the area.”

The Saints can wrap up hosting the Class 5A, Area 6 tournament with a win over Demopolis Tuesday night.

The rest of the goals are what you’d expect: Win the area tournament, win the regional tournament and reach the state final four.

Of course, the biggest goal is to win the state championship game.

Harris said he makes sure to keep it all in perspective for his team, but he has talked to them about the big goal for the season.

“We always outline those four things and you have to look ahead,” Harris said.

Postseason play is nearing and Harris is starting to get questions about how far this Saints team can go.

“I had the principal ask me the other day, ‘Coach can we get to Birmingham?’ Harris said. “I told him with the grace of the good Lord if we can keep everybody healthy and maintain our dignity and students here do what’s asked of them we can make a run. I think this group here still has something to show.”

Selma knocks off No. 2 Sumter Central