Selma knocks off No. 2 Sumter Central 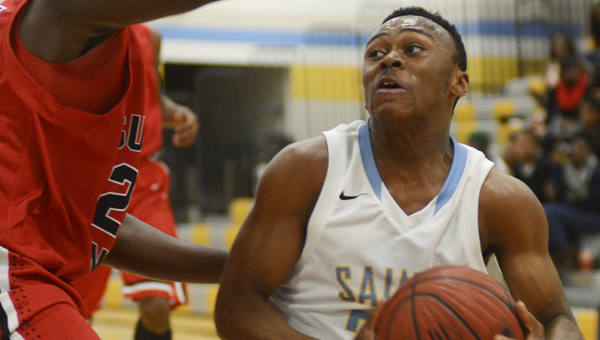 The Selma Saints (12-12) used tenacious defense and transition offense to win their biggest game of the year Friday night, upsetting No. 2 Sumter Central (22-6) 54-36.

Selma led by six at halftime, but the Saints outscored Sumter Central 21-9 in the third quarter and then held on in the final period for a statement win.

“They are the No. 2 team in the state and to beat them is an outstanding victory,” Selma head coach Woodie Jackson said.

“We still made some mental errors but we played on both ends of the floor tonight, on offense and defense.”

The Saints led 32-25 in the third quarter but the lead quickly ballooned to eighteen after Khamaul Jones, Keyshawn Ford and Juwan Watters made layups and free throws. The Jaguars were unable to get anything going and eventually began settling for three-point shots, which allowed the Saints to run the floor for easy points in transition.

“Good defense creates easy offense,” Jackson said. “When you have to come down here and work all the time against a set defense, it makes it a struggle for us.”

The Jaguars attempted to inch their way back into the game in the fourth quarter, but never got within 13 points.

When the Jaguars did close the gap to thirteen, Dexter Hatcher quickly dispelled any chances of a Sumter Central comeback by grabbing a loose ball and putting it back up for a layup, ending the small Jaguars run that had given them a faint chance.

Unfortunately for Selma, Tuesday night’s loss at Greenville prevented this win from tying Sumter Central at the top for first place in Class 5A, Area 6.

Khamaul Jones scored 17 points for the Saints in the win and Keyshawn Ford added eight points.

The Saints jumped out to a 21-9 lead in the first half, but the Jaguars inched their way within six at the break.

But Selma was too good on the defensive end, holding the Jaguars to just five made shots the entire second half.

For a Saints team that has been involved in so many close games this season against ranked teams — including two back and forth contests with No. 2 Dallas County — the win is a nice change of fortune.

The Saints travel to Demopolis Tuesday with faint hopes of capturing a tie for the regular season area title.

If Selma wins and Sumter Central loses its final area game to Demopolis on Monday, the Saints and Jaguars will tie.

“That’s what we rode down the stretch tonight, the defense,” Selma head coach Anthony Harris said. “Defense kept us in there and we got a couple of turnovers in the third quarter. One time it was 21-11 and then they made a little steady run and we stole a couple of balls and made a couple of layups on them.”

Selma led 20-11 at halftime and was unable to stretch its lead in the third quarter, but the Saints poured it on in the final eight minutes to pull away for a big win.

Moore opened the fourth quarter with a layup and Jamya Smith scored on Selma’s next possession to help open the lead.

The Saints held the Jaguars to only four points in the final period.

The Saints, who appeared in the ASWA rankings for the first time this season Wednesday played their first game as a ranked team.

The win gave the Saints their twentieth win on the season, giving Selma’s girls eleven consecutive seasons of 20 wins.

Selma plays at Demopolis Tuesday. If the Saints beat the Tigers, they will host the Class 5A, Area 6 tournament.