Police: Handicap spots will be enforced 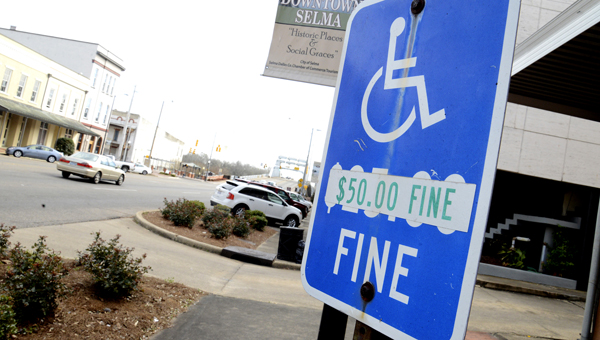 A sign clearly marks one of the handicap parking spots located on Broad Street in downtown Selma. The sign also shows the monetary penality that could be levied against those who use the parking spot who are not handicap. Selma Police officials have said they intend to step up patrols to enforce handicap parking, as well as other parking violations.–Jay Sowers

That quick little sprint into one of Selma’s downtown shops could cost you a little bit more if you park in a handicapped spot without the proper tag hanging from your rearview mirror.

Selma Chief of Police William Riley said officers from his department would be stepping up patrols in the near future around those spots designated to be used only by those with physical impairments.

“We’ve had complaints about the handicapped spots on Broad Street and around Alabama Power over on Church Street,” Riley said. “We just want to let people know we are going to put more time into this, because if you are someone who has been disabled for some time, that is a struggle to get out of a car and get to the pharmacy, or wherever you need to go.”

Riley said handicapped spots are a topic of personal importance to him, having used them for a long period himself after a surgical procedure done on his back.

“It is of great concern to me,” Riley said. “For one year of my life I was handicapped due to back surgery, so I know how important it is. I’ve had to live with it after having that major surgery.”

The current fine for illegally parking in a handicapped spot is $50 in the city of Selma.

Sheila Harris, who works the cash register at Pilcher-McBryde Drug Co. on Broad Street, said it is not a rare occurrence for her to see someone use the lone handicapped spot in front of the landmark storefront who does not have the tag or the need.

“I see a lot of people swing into this parking spot and walk down the street to eat. Sometimes they will stay there 20 to 30 minutes,” Harris said. “A lot of people do need to use that spot, and too often it’s taken up by somebody down there eating.”

Riley said officers from the department have been kept busy with larger cases lately, but plans are for officers to make a more concerted effort to patrol downtown parking areas, including not only handicapped spots, but also fire lanes and two-hour parking spots.

“We’ve been so inundated with other major crimes, and you’ve got to balance it all,” Riley said. “This doesn’t rise to the level of somebody getting murdered or getting shot. It all comes down to putting it in perspective. And it’s simple; if you aren’t handicapped, don’t park there.”