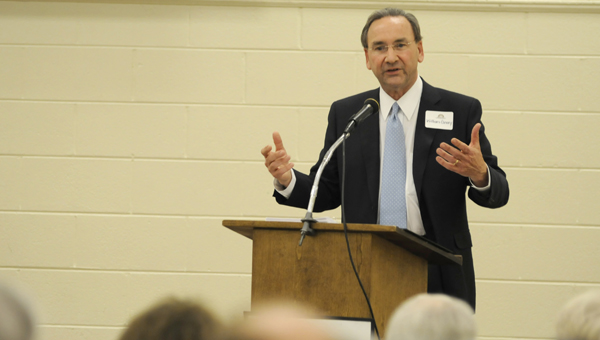 A group of heroes gathered Thursday at the Carl C. Morgan Convention Center.

During the Selma-Dallas County Centre For Commerce’s annual meeting, Business Council of Alabama President Billy Canary called attendees heroes for work already accomplished, but challenged them to strive to continue improving the community. Many of the attendees were public officials or prominent leaders in the business community.

“A hero is a person who is willing to do for others and sacrifice for themselves,” Canary said. “We all thank you for your leadership and the time that you volunteer to help improve Selma.”

The number may not mean much without context, he said, but are a crucial part of his life and improving the quality of life in Alabama.

The first number —124 — is the number of chambers of commerce in the state of Alabama.

“All of them individually are great a great strong voice, but can you imagine if you could unite them all in one big shout,” Canary said. “We’ve done that and it’s called the Chamber of Commerce Association of Alabama. The chambers are ground zero for the opportunities of change and that’s inspiring.”

The second number 750,000 is the number of employees he represents through the Alabama Business Council of Alabama.

Though the first two numbers were important, he said the last few are perhaps the most crucial. His third number was the amount of children that are four years old.

“We are fighting outside of what people call their comfort zone and their box as the Business Council of Alabama to be the leading charge for pre-k funding,” Canary said. “The theory isn’t very complicated. When you put a child in a pre-k program, I’ll tell you what’s going to happen — it’s only good stuff.”

He continued his focus on education with the number 1,237 — the number of children in ninth grade that drop out of school each day in America.

“That’s one every twenty-six seconds,” Canary said. “I submit to you, we can do better.”

His largest number — $6 billion — is the amount that the business community in Alabama provides the state and local government. And the final figure is the number of members of the Alabama Legislature.

As Canary drew to the end of his speech, he said the future of the country will not be decided on a battlefield, but rather in classrooms across the nation.

“Do you want to build schools or do you want to build prisons,” he said. “The future of our country is in the classroom and by our reading level, you can determine the prison population. Our job, every single day,  is to create quality of life everyday for the people in the business community and it really is to sign the front of the check so someone can sign the back and make a difference in our great state.”