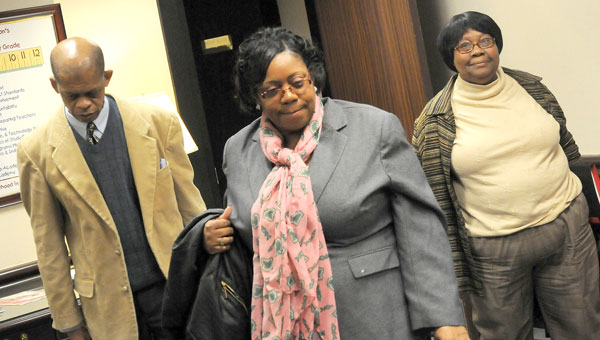 MONTGOMERY — The Alabama State Board of Education explained its reasoning behind a proposed takeover of the Selma City School System in a closed-to-the-public meeting Wednesday.

Four of the five city school board members, Superintendent Gerald Shirley and the board’s attorney Katy Campbell met with state superintendent Dr. Tommy Bice Wednesday before making their case to retain control on Feb 12. The meeting lasted an hour and a half and was closed to the public.

After the meeting, Shirley wouldn’t go into the exact details of what was discussed, but said discussion focused on items not included in the corrective action plan.

“It was a very productive meeting,” Shirley said. “There were some things that were discussed that were not in the original plan. The Selma City School System and the state department will work collaboratively and cooperatively.”

The State Department of Education requested the corrective action plan after it released the results of a scathing investigation in October that alleged inappropriate sexual behavior and failure to enforce certain policies.

The Selma City School system responded with a report that said the system would establish procedures to improve overall instructional and academic performance, implement a comprehensive monitoring system to ensure accountability, put an evaluation program in place and build public trust in the Selma community.

But the plan didn’t meet Bice’s standards, according to a resolution stating the board of education’s intent to take over the school system.

The corrective action plan didn’t include a summary comprehensive document, confirmation that remedial measures would be applied systematically, or a mechanism to track progress in implementing remedial measures, the resolution said.

Bice also said discussion during the meeting went well and would help when deciding the school system’s future.

“An agreement was reached to work collaboratively with the State Department of Education to expedite actions that were identified as crucial to any further decisions to be considered,” Bice said in an email.

Shirley and his staff will have one, final opportunity on Feb. 12 to convince the State Board of Education that a takeover isn’t warranted.

No uniform method for a takeover exists and state intervention isn’t necessarily negative, according to Bice.

He used the takeover of Midfield’s School System as an example of a positive outcome from state intervention during the Alabama State Board of Education’s special-called meeting on Jan. 17.

“They had one of the highest increases in graduation rates of anybody on the list,” Bice said during the meeting. “That shows what can happen when we all work together to make this happen.”