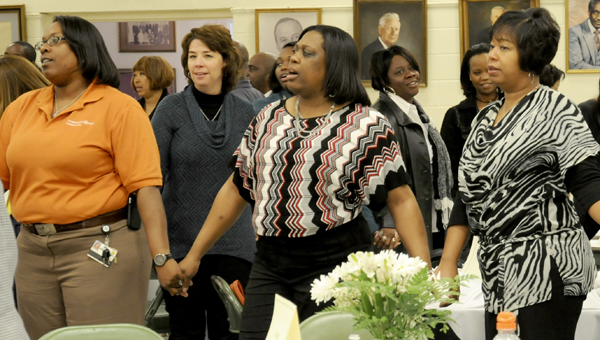 “The best tribute we can make to Martin Luther King on this, his birthday, is to remember that the price of freedom is never free. It is never free,” U.S. Terri Sewell, the keynote speaker at the breakfast, said. “It has been paid for by the blood, sweat and tears of others. We stand on the shoulders of giants, and we drink from the fountains we did not dig.”

“Our modern-day challenges are no less debilitating then they were 50 years ago,” Sewell said. “When gun violence comes to communities like Selma, and the escalation of Black crime demonstrates a blatant disregard for human life, we have much work to do.”

Profits from admission ticket sells were used to fund the Links’ scholarship program. Links is an organization committed to enriching, sustaining and ensuring the culture and economic survival of African Americans.

Dorothy Arnold, who lives in Selma, makes a point to attend the event each year because she said it is important to recognize those came before us.

“[Dr. King] marched for us, for our rights, and we are so glad to have those rights now,” Arnold said. “Still in America, we are not doing what we are supposed to do, but he has fought for us.”

Room for improvement: R. B. Hudson Middle School was the only school in the Selma City School System to declared... read more