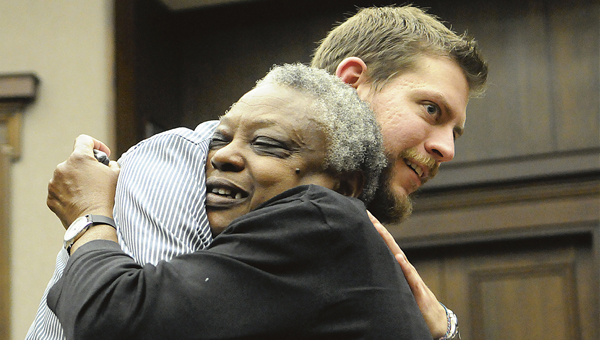 Doug Bacon, who on Jan. 8, 2013, saved Priscilla Woods after she jumped from the Edmund Pettus Bridge, receives a hug from Priscilla’s mother, Beatrice Woods, during a meeting at Selma City Hall to honor Bacon’s heroism. — File Photo

A man who the city of Selma deemed a hero last year has received recognition from a national organization.

The Carnegie Hero Fund Commission is recognizing Nathaniel “Doug” Bacon, the Auburn University graduate who dove into the Alabama River to save then Opelika resident Priscilla Woods from drowning after she jumped from Edmund Pettus Bridge on Jan. 8, 2013.

The organization, which recognizes civilian heroism in the United States and Canada, has awarded Bacon with a Carnegie Medal.

“The medal is given throughout the United States and Canada to those who risk their lives to an extraordinarily degree while saving or attempting to save the lives of others,” the Carnegie Hero Fund Commission press release read.

Bacon was among 20 recipients announced for the final award announcement of 2013. Since the Fund was established in 1904, there have been 9,653 honorees of the Carnegie Medal.

The Times-Journal reported last January that Bacon noticed Woods on the outside of the bridge’s railing on his way driving back to Auburn. Once he realized Woods jumped, he drove to the Selmont side of the bridge, stripped down to his briefs, jumped in the river and swam out to save her.

According to the press release, he hooked his arm under hers and across her chest, and stroking with his left arm, pulled her toward the bank.

His heroic act was recognized by the city of Selma, the Selma Fire Department and Selma Police Department at a special ceremony weeks after the heroic effort at Selma City Hall. During that event, Woods’ mother, Beatrice Woods, ran across the city hall chambers to embrace Bacon for his work to save her daughter.

“I was happy to help,”Bacon said to the Time-Journal in response to the rescue January 2013.