Vera B. Drain, 89, passed away Tuesday, January 7, 2014 in Cincinnati, Ohio.  She was born in Selma, Alabama on February 28, 1924 to Vernie and Jeff Thomas.  She attended Alabama A & M University and became a lifelong seamstress. 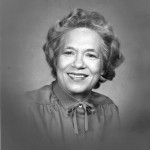 A funeral mass was conducted at Madonna Catholic Church in Detroit, Michigan on January 17, 2014 and was buried at Woodlawn Cemetery in Detroit.