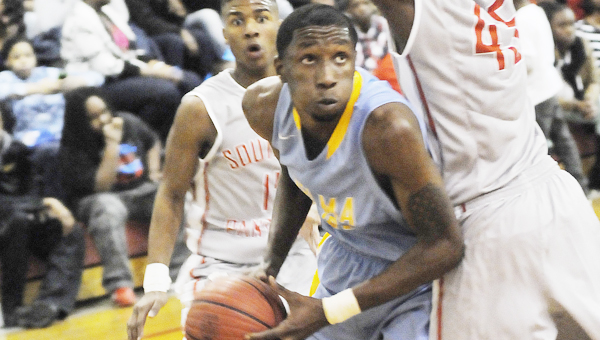 Selma’s Khamaul Jones attempts to duck underneath a Southside defender on a post move in Saturday night’s game. The Saints held on for a 59-56 win, despite a big rally from the Panthers that sent the game into overtime. The Saints won both games against Southside this season.–Daniel Evans

Selma (11-11) made its free throws in overtime and held on for a 59-56 over rival Southside (7-10) in a thrilling game that saw both teams go through a roller coaster of ups and downs.

Kahmaul Jones made two big shots to begin overtime to give the Saints a lead they never relinquished.

“It is a big win. Southside is always a rival that is going to play you hard,” Selma head coach Woodie Jackson said. “[This is an] intimidating atmosphere and we had a ten point lead and gave it away. We went into overtime but we were blessed to win this time.”

The Saints trailed most of the game, but rallied in the third quarter and took a 46-35 lead with just under four minutes to play in the fourth quarter, but Southside wouldn’t go away quietly. Jhlandius Sullivan hit a jumper off the backboard with 16.4 seconds left to tie the game 50-50, capping a 15-4 Panthers run to end regulation that sent the game to overtime.

In overtime, the Saints won the opening tip and immediately got the ball to Jones, who hit a turnaround jump shot that gave Selma a 52-50 lead. Jones scored again on the Saints’ next possession to give Selma a four-point lead with 1:50 left to play.  The lead allowed Selma to put some game pressure on Southside.

“It’s an advantage because if you have the lead you can play, not necessarily ahead but you can kind of strategize a little more than chasing from behind,” Jackson said about his team taking a quick lead in overtime.

Jevon Hall answered with a three-pointer that got the Panthers within one, but Selma stayed aggressive and Keyshawn Ford was fouled and made two free throws to extend Selma’s lead to 57-54.

Even after a missed three-pointer in the final seconds, Southside wasn’t quite done. Hall came up with a steal and went coast-to-coast for a layup to bring the Panthers within one with 11.1 seconds left.

Jones was fouled with 8.4 seconds left and made both free throws to give Selma a 59-56 lead. Southside raced the ball down the court but Brandon’s Oliver three-point attempt rimmed out as time expired.

Southside started the game playing with a lot of energy and it helped the Panthers take a 14-6 lead after the first quarter and a 22-18 lead at halftime.

After trailing for three quarters, Selma’s Marshall Woods made a jump shot as the buzzer sounded signaling the end of the third quarter to give the Saints their first lead of the game at 32-31.

The Saints rode that momentum to a 46-35 lead, but turnovers nearly gave the game away.

Southside rallied but still came up a little short, but Brown was happy with his team’s performance.

“I’ve been talking about growing up all year,” Brown said. “Tonight these guys grew up.”

Hall scored 21 points to lead the Panthers and Ford led the Saints with 20 points.