Bears stay atop area with win over Eagles 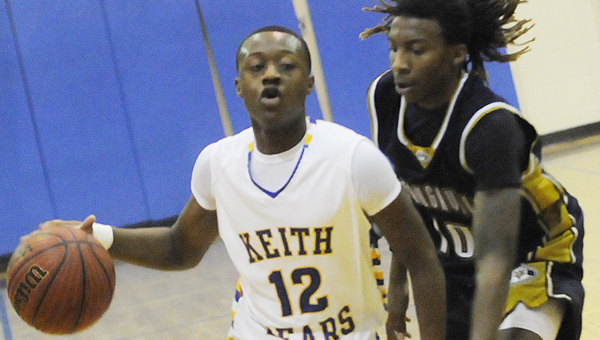 Keith’s Jaequan Simmons dribbles the ball past an Autaguaville defender in Friday night’s victory. Simmons scored nine points for the Bears in the win, which moved them to 5-0 in area play.–Daniel Evans

ORRVILLE — Keith held off a big Autaugaville rally in a 70-57 win Friday night that puts the Bears in the driver’s seat in Class 1A, Area 5.

Both the Eagles and Bears came into the game undefeated in area play, meaning the winner of the game would control their own destiny the rest of the way. For Keith, the game felt like a must win, because the Bears still have to travel to Autaugaville next Friday for their final area game of the season.

“It is extremely huge,” Keith head coach Tommy Tisdale said of the win. “I told the guys just a minute ago that this win is bigger than any of the area rivals, county rivals that we have had thus far.”

Keith led 40-30 at halftime but the Eagles started the second half on a 12-4 run to make the score 44-42. With the lead dwindling, the Bears went to a full court, pressure defense to try to speed the game up and it worked. Keith used multiple steals from John Pettway and a huge three from Anfernee Simmons to go on a 13-0 run to end the third quarter.

Keith led 57-44 after three quarters and continued to stretch its lead in the fourth quarter. Autaugaville tried to muster a late run, but by then the deficit had grown to 17 points.

“They had more second and third attempts on the goal as far as rebounding,” Autaugaville head coach Darren Golson said.

Tisdale said his bench really sparked the team in the second quarter, turning an 18-18 tie into a ten-point halftime lead. Dalven Johnson was among the players that stood out.

“[He] played huge off the bench,” Tisdale said. “I don’t know the rebound count but he played huge. There were times I had to take starters out to put him back out there, but like I told the guys it doesn’t matter what horse you ride what night. We just ride the one that is taking us to the race that night.”

The game resembled a horse race at the start, with both teams racing up the court and scoring with ease. Autaugaville led the majority of the first quarter, but Keith scored the last two baskets of the opening period to tie the game.

After the first quarter, the Bears got out of their signature zone defense and went to a man so that Tisdale could see where the defensive breakdowns were occurring.

“I felt we weren’t talking, that we weren’t rotating enough,” Tisdsale said. “At the end of the first quarter, I told the guys we were going man-to-man.”

Tisdale also decided to dial up the pressure in the second period and it was effective, forcing turnovers and allowing Keith to build a 35-22 lead, but the Eagles stayed just close enough to keep the Bears from being able to run away.

The win puts Keith at 5-0 in the area and drops Autaugaville to 4-1.

The Keith Lady Bears were challenged for the first time in a few weeks in a 50-39 win over Autaugaville Friday night.

The Bears (15-6) used a big night from Zykia Pettway to move to 5-0 in Class 1A, Area 5 play. The Eagles came in undefeated in region play, meaning this game pitted the area’s top two teams against one another, but in the end Keith pulled away in the second half for one of its biggest wins of the season.

“We needed this one because we still have to go to Autaugaville and play,” Keith head coach Cecil Williams said. “We are going to have to really play there. It is going to be a challenging game.”

Williams said his team used good ball movement to keep the lead most of the second half.

“We had good ball movement and spacing on the floor,” Williams said. “We made good passes to get the defense to overshift and opened it up for the girls under the goal to get a few easy baskets. That’s what kind of kept us in the lead.”

By Andrew Garner The Andalusia Star-News Straughn took an early lead and played aggressive throughout to claim a crucial 64-50... read more