State warns Selma City Schools about its intent to intervene 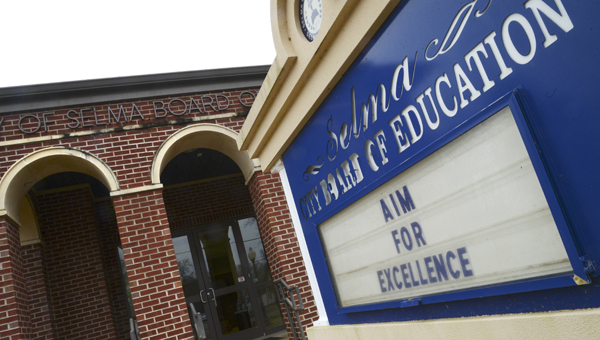 The State Board of Education unanimously approved a resolution Friday, notifying the Selma City School System of its intent to intervene in the system’s operations. — File Photo

With a unanimous vote, the Alabama State Board of Education strengthened the possibility of it taking over the Selma City School System.

The state board approved a resolution, during a special-called meeting on Friday that notified the Selma system of its intent to take over, but did not set a specific date. Instead, the Selma City School System will have a final opportunity to make its case for retaining control at a Feb. 12 board meeting in Montgomery.

“When we have an issue with a school system and recommend intervention, we first have to pass the action of intent to intervene that allows them to respond,” State Superintendent Dr. Tommy Bice said during the meeting.

The resolution, introduced by Bice, cited the late submission of a corrective action plan as one of the reasons for state takeover. The plan was in response to a scathing state investigation of the Selma City School System that was revealed last fall.

According to the resolution, the corrective action plan also failed to include several necessary components.

The Selma City School System was given 21 days to submit the plan, but didn’t send it to the state department until nearly a month after the initial deadline.

The 83-page corrective action plan stated the system would: institutionalize processes and procedures to improve overall instructional program and academic performance; implement a comprehensive monitoring system to ensure accountability at every level of school operations; institute a continuous system-wide evaluation program; and implement a continuous plan for building public trust in the Selma City School community.

District Five board member Ella Bell, who represents Selma, said she is disappointed with many of the Selma City School Systems actions.

“I am first and foremost concerned about safety and security for the children in that system,” Bell said during the meeting. “I think we have all heard … the list of negative things that are occurring there that involve our students, our teachers, our faculty. All of that truly has no place in the public school system. I am really, really tired of the very minimal, casual presentations and performance.”

The state investigation found the Selma City School System failed to adequately investigate allegations of inappropriate sexual behavior, failed to enforce policies regarding graduation requirements regarding standardized testing procedures and has a disregard for instructional time.

“I believe their [state school board’s] decision is in the best interest of our district’s overall success,” Chestnut said. “The state department is the leading institution and they set the tone for ensuring all districts have what they need to be successful, regardless of where they are economically or regionally in our state.”

“I just want the system cleaned up; that’s my whole point,” Hicks said. “If we can’t do it, then maybe the state can.”

“At the end of the day the primary concern, in every school, all the 1,500 schools in Alabama, is making sure that students are in an atmosphere that is conducive to learning,” Sibley said. “The only emphasis I would try to impart is that intervention is not necessarily the death nail to a school system. It can be seen as the beginning of a good thing, the beginning of a turnaround.”

During the meeting, Bice used the state’s takeover of the Midfield School System as an example of a positive result.

“They had one of the highest increases in graduation rates of anybody on the list,” Bice said. “That shows what can happen when we all work together to make this happen.”