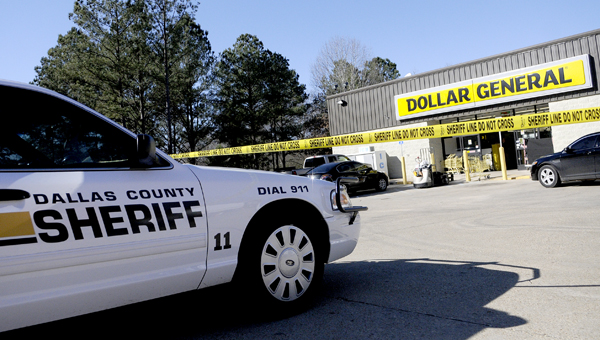 Editor’s note: This article has been amended from its original version to clarify the fact that the shooter used his own gun in the incident.

ORRVILLE — One person is dead after a customer at the Dollar General in Orrville began shouting and waving his gun in the air.

Dallas County Sheriff Harris Huffman said the incident appeared to be a case of self-defense and no one has been arrested in connection with the shooting Thursday afternoon.

The incident occurred when Dallas County resident Kevin Mclaughlin entered Dollar General reportedly waving a pistol in the air, Huffman said. Mclaughlin then ushered a group of people inside the store into a break room.

Huffman said Ellis used his own weapon in the incident.

Orrville resident Deforest James said he was in the Dollar General moments before the shooting occurred. James exited the building shortly after Mclaughlin waved the pistol and told customers not to move.

“He said he was looking for three bad mother—-ers and then I ran out and I busted out through the back door,” James said.

Orrville Mayor Louivenia Lumpkin received a call about the incident from her son while at work.

“He said there has been an accident at Dollar General and I thought it might have been a traffic accident,” Lumpkin said. “I was working about two miles away. When I got here I found out that someone had been killed.”

Dallas County resident Riley Powell said he was mere minutes away from being inside the store at the time of the robbery.

“I pulled up to get some foot powder and the sheriff was already here,” Powell said. “I would have been inside the store if I hadn’t decided to take out the trash before coming over.”