Poets clip Saints by one in overtime 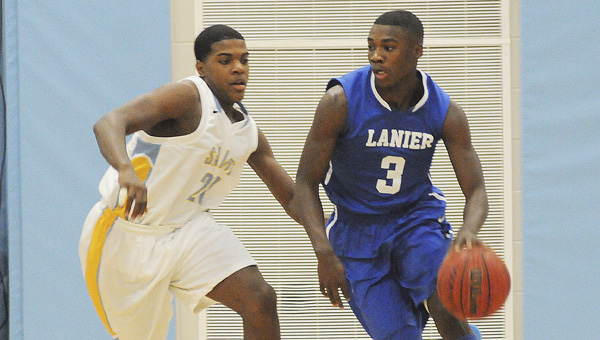 Aderick Moore made a free throw with 23 seconds left giving the Saints a one point cushion but Lanier’s Laron Sawyer answered with a jumper on the following and final possession, edging his team past Selma 50-49.

“Our kids played hard tonight, but we must improve,” Selma head coach Woodie Jackson said. “Turnovers really killed us, and you can’t win against good competition when you commit that many turnovers. We’re going to have to get better.”

“I think we’re finally coming together as a team,” Lanier head coach Brian Williams said. “Our guys are beginning to feel each other’s emotions and they’re learning what it takes to win. This was a tough win for us, but a good one. We’re moving in the right direction.”

Jones dunked the ball on Selma’s second possession and the Saints took a early 4-0 lead to start the contest but it wouldn’t last long as the Poets stormed back and went up 9-7 on a Deshawn Flowers layup.

The lead changed four more times prior to the half and Sidney Lanier went to the locker room guarding a 22-19 advantage.

The third period was all Selma as Keyshawn Ford sank two three pointers and a jumper while his teammate, Jones, added seven points of his own, rallying their team and giving the Saints a 36-27 lead at the beginning of the fourth period.

The Saints led 38-29 with 6:45 remaining in the fourth and seemed to have the game in control.

Instead, the Poets went on a 7-0 run to tie the contest at 43 with a little over a minute remaining in regulation.

Sawyer made a three pointer and Deshawn Flowers hit two layups to tie the Saints in the final minutes, sending the game to overtime.

Selma’s next game is against Wilcox Central Friday night.

The Lady Saints began the game with a 12-0 run and never let their foot off the gas.

“We were able to get up early and keep the pressure on them,” Selma head coach Anthony Harris said.

“Our team played especially well on offense and defense tonight and we were able to play a lot of girls. I’m really proud of the direction this team is going in.”

The Lady Saints were led by Jamya Smith who sank four three point buckets for a total of 12 points.

“We’ve had a good season so far, but we must stay focused,” Harris said.