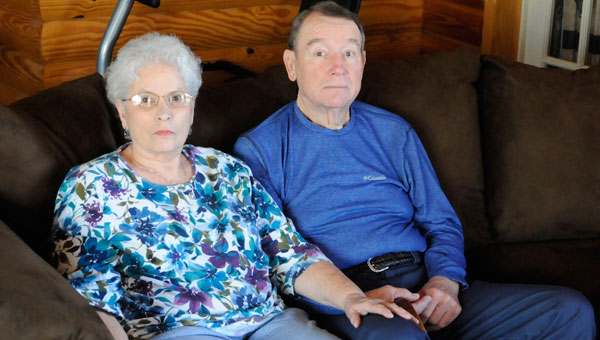 Carol Smallwood, left, sits with her husband Lothian Smallwood as they discuss his upcoming induction into the Alabama Baseball Coaches Hall of Fame. Smallwood served as athletic director at Wallace Community College Selma for 25 years before retiring in 1997. (Daniel Evans | Times-Journal)

After accumulating an incredible win-loss record at Wallace Community College Selma, Lothian Smallwood will be inducted into the Alabama Baseball Coaches Association Hall of Fame Jan. 17.

Smallwood compiled a 495-253 record at Wallace over a 22-year period, and seven of his teams advanced to the Alabama Junior College Conference state tournament, including in 1982 when his team finished the season ranked No. 6 in the nation. His 1984 team was also very successful, going 40-10.

“I had some really, really good players,” Smallwood said. “They had good skills. They were good students and they really tried and that is one reason why we had such good teams.”

Smallwood said he only had one losing season as baseball coach at Wallace Community College and even that season he was only one game under .500. He also spent some time as the head basketball coach of the Patriots, but he admits he didn’t have as much success in that program as he had with baseball.

He said another coach taking over the basketball program allowed him to completely focus on baseball, which allowed both programs to grow.

Since retiring after 25 years of acting as Wallace’s athletic director, Smallwood battled malignant lymphoma, which was found in his brain just over two years ago. Smallwood realized a day or two before Thanksgiving that he could not even pick up a sheet of paper and by the time the holiday arrived, his left arm was paralyzed. Beacuse he had family in town, he waited until after Thanksgiving to go to the doctor, where he was diagnosed with cancer after three MRI’s and a biopsy.

After two bouts of chemotherapy, his body had taken about all it could handle and Smallwood was starting to worry whether doctors would have an alternative treatment for him.

But a MRI after the second batch of chemotherapy revealed that the tumor had shrunk and a MRI taken a few months later showed the tumor was completely gone.

“There was no trace of it,” Smallwood said. “I’ve had three, maybe four MRI’s since then and I have another one coming up next week. Every one of them has said no cancer.”

Smallwood, 72, doesn’t act like a man that has had brain surgery. For one thing, his memory is as good as ever. He rattles off players’ names, from Brian “Wild Thing” Corbett to Brad Strickland as if he saw the players yesterday. He can recall season records and game situations as if they just took place. A lot of times he even runs into some of his former players.

After 25 years of being an athletic director, the memories pile up. It only makes sense that he and his wife Carol have a whole stack of photographs — team photos and individual shots of hundreds of players — but one thing is missing: Smallwood.

When the photographers came calling, Smallwood would always step out of the way so that his players would get the recognition they deserved.

“When they told us we were going to be in the hall of fame, they wanted pictures of me, “ Smallwood said. “[Carol] went all through the house and we don’t have any pictures of me.”

Smallwood also coached one year at Meadowview Christian and Morgan Academy after he retired from Wallace.