Without Lee, Hornets roll past Southside 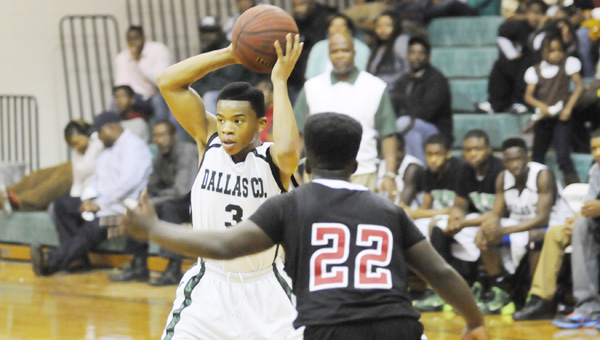 Without do-it-all big man William Lee in the lineup due to a toe injury, the rest of the Dallas County Hornets (15-3) had a chance to show that they are more than a one man team Saturday night against Southside (5-11) in a county rivalry game.

Even without Lee, the Hornets pummeled the Panthers 57-33 behind big nights from Raheem Phillips and center Lowell Furlow. Phillips scored 14 points and Furlow added eight points but controlled the boards most of the evening.

“It says a lot to be able to beat a rivalry team like Southside without William Lee,” Dallas County head coach Willie Moore said. “It validates the rest of the kids that they can perform at a high level without [him].”

The Hornets, ranked No. 4 in Class 4A in the ASWA poll, never trailed. Technically the game was never even tied 0-0. A technical foul was called on the Panthers in pregame warmups and Phillips hit a free throw before the game even started to give Dallas County a one-point advantage.

Pregame warmups is also when Southside was given the first hint that Lee wasn’t playing.

The Panthers attempted to keep it close in the first half. After trailing by nine at the end of the first quarter, Southside narrowed the lead to 16-11. However, the Hornets finished the half with a strong run sparked by Phillips and Jerrod Moorer, which put the finishing touches on a half that saw Dallas County handle Southside’s pressure defense extremely well.

After leading 30-19 at halftime, the Hornets’ rebounding edge started to get bigger in the second half.

Southside head coach Cedric Brown said his team was “manhandled” inside, which he felt was the difference in the game.

Tavaris McGuire keyed a big run with a layup early in the quarter. Moorer, who scored 20 points to lead the Hornets, followed with a three-pointer and McGuire came back with a three that stretched the lead to 46-25.

In the fourth quarter, Dallas County held the ball and stalled the clock, using the big lead as an opportunity to work on its end of game offense.

Moore was critical of his team following a win Thursday night over Selma, but after this game was he was proud of his team’s effort.

Furlow and Phillips really stood out.

“Furlow was big and Phillips was really big tonight,” Mooore said “He showed a lot of maturity and a lot of character. He ran the show as we need him to run it tonight.”

After the game, Moore said Lee “may be out of a couple of games.” Dallas County’s next game is Tuesday, Jan. 14 at Keith, which matches up two teams ranked in the top four in the state in their classifications. Southside’s next game is Jan. 14 at Excel.

Southside had a chance to tie with 2.3 seconds left but Mercedes Brown’s shot got wedged between the rim and the backboard and didn’t comd down. Brown was fouled on the play and went to the free throw line to tie the game, but missed both attempts.

“Being down seven at the half, I tried to stress that we weren’t out of the game,” Dallas County head coach Charles Thompson said. “I honestly believe we won the game in the third quarter because we stepped it up on defense and we did a better job defending the paint.”

Alexis Goodwin’s layup with 4:34 left gave the Hornets the lead and Camisha Moore made a layup seconds later to make the score 24-21 Hornets.

Goodwin added a free throw and then Moore made a runner with 1:57 left to play to give Dallas County a 29-23 lead.

Southside would make one last run and when Calvondrea Blackmon hit a layup with 18.9 seconds left the Hornets lead was down to 29-25. Brown got a steal on Dallas County’s inbound pass and was fouled. She made both free throws to bring the score to 29-27.

After two missed Dallas County free throws, Southside had the ball with 4.1 seconds left. Bothwell called up a play that featured Brown going to the rim and she had a great look but the ball ended up stuck on the backboard.

“The team I watched the last two nights is not the same team that played on Thursday night against Straughn, so we are still trying to find that comfortable place,” Southside head coach Jason Bothwell said.

Morgan Academy senior Dalton Lee, center, screams while he leaps into the air on his way to the basket during... read more