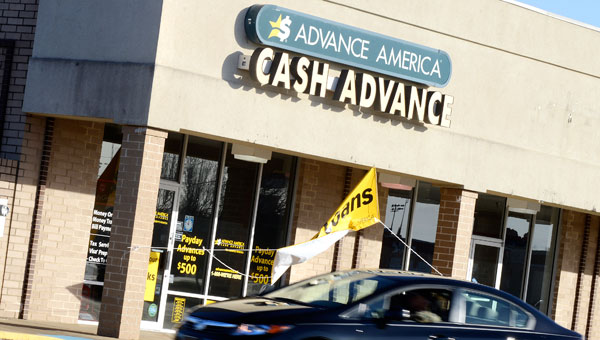 Traffic passes the Advance America location in front of the Selma Mall on Saturday afternoon. The Selma City Council is considering putting a one-year moratorium in place to prevent such stores from renewing a license or obtaining a new one. (Jay Sowers | Times-Journal)

New payday loan businesses may have a difficult time opening up shop in Selma.

The Selma City Council is considering placing a one-year moratorium on new payday loan stores, which would prevent the stores from renewing or obtaining new licenses.

Selma City Councilman Michael Johnson proposed the idea and told the story of a close friend who ended up in a cycle of debt.

“A good friend of mine, an older guy, came to me after only borrowing $500 and he ended up owing $3,000,” Johnson said. “He eventually died and had his car and house taken from him.”

Johnson said the man paid a small amount each week, but the interest continued to increase.

“He told me ‘Michael, I’m not able to pay them back in full, so I go and pay a little bit every week, but the interest just compiles and compiles,” Johnson recalled the man saying. “‘I don’t know how I’m going to pay it.’ I understand that we have some citizens that have no other choice, but they need to be educated about the dangers of payday loans.”

“Once liquor, lottery and payday loans start popping up you are going to have some problems,” Benjamin said.

Payday loan owners refute many statements from critics, saying that high interest rates are an unfair way to characterize their industry.

Payday loan businesses offer a maximum of $500 with a more than 400 percent interest rate, but Advance America Vice President Jamie Fulmer said regulated businesses do not charge more than one fee for taking out a loan.

“While it is easy to criticize our industry based on part of the facts, our customers understand the value of our product,” Fulmer said.

He said Advance America — which has dozens of locations in Alabama — charges a $17.50 fee and doesn’t tack on any additional fees, even when payment is late.

“It’s not like they are trapped in a cycle of debt,” he said.

Legislation is also scheduled to be introduced in the Alabama House of Representatives to lower interest rates on payday loans.

ORRVILLE — State Rep. Darrio Melton (D-Selma) will be reintroducing legislation in the upcoming legislative session that would allow the... read more