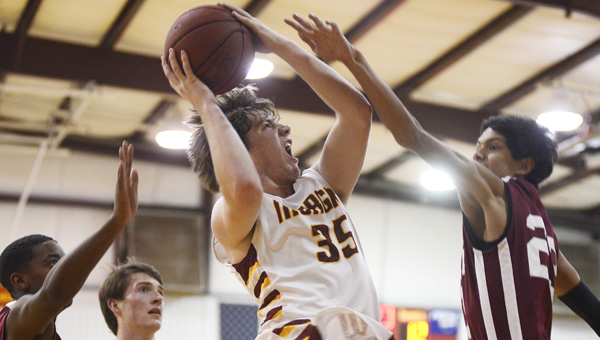 Morgan Academy senior Dalton Lee, center, screams while he leaps into the air on his way to the basket during the first half of Friday’s game against Escambia. Lee led the Senators with 34 points, two steals and four rebounds.–Jay Sowers

Trailing 10-12 after the first quarter of their Friday night matchup with Escambia Academy, Morgan Academy varsity boys head coach Bob Taylor told his players to turn up the defensive pressure, hoping it would slow down the Cougars offense and give his team more chances to score points themselves.

Boy, was he right.

It wasn’t an immediate turnaround. Morgan (9-8) would gain the lead with two minutes left in the first half. But once the Senators got the lead, they never looked back, eventually cruising to an 81-50 win.

“They came out and started hitting the shots after that break,” Taylor said. “And going to the full court pressure changed the whole complexion of the ball game, and I wasn’t sure it would.”

Senior Dalton Lee paced the team with 34 points, and Taylor said his play was a big part of the win, both offensively and defensively.

“Dalton had a great game,” Taylor said. “He can score against anybody, I firmly believe. He got after it and played hard. And I thought he played his best defense, on a quality big man, as I have seen him play in two years. When he has the ball, he gets us going. And when he hits those three’s, it gets everybody going. I think the whole team fed off of that energy tonight.”

With a swarming defense and highlight reel passes, Taylor said the familiarity his players have with each other was apparent during Friday’s win.

A fast start by Escambia put the Morgan (0-17) girls in an almost insurmountable hole early, but head coach Jennifer Moore said there was plenty to be positive about on both sides of the ball following their 57-24 loss to the Cougars.

Katherine Averitt lead the Senators with 15 points, many of them coming in the paint. Moore said having a presence is something the players have gotten better at as the season has progressed.

“We were not getting offensive rebounds at the beginning of the season. We weren’t getting under the goal, we were just watching,” Moore said. “Now we are understanding that we need to block them out and get those rebounds.”