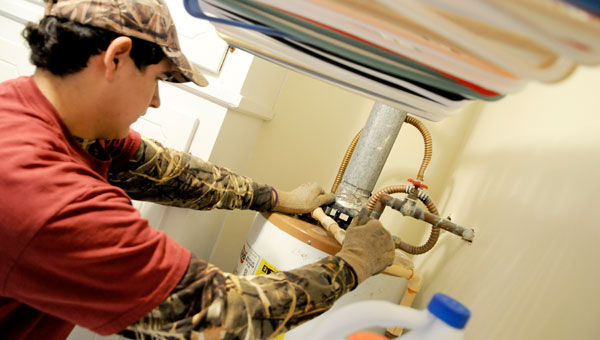 Across Selma, thousands of water pipes are being replaced.

After frigid, arctic temperatures, reaching as low as 10 degrees, passed through Dallas County Monday and Tuesday, many residents were left with broken water pipes. The widespread problem is resulting in long wait times for repair, but an economic boom for plumbing companies.

Austin Moore, an employee of Plumbing Contractors LLC, said the sudden increase in jobs is resulting in increased hours, but he said the number of calls he received this week equals several months of work.

“It usually takes months and months to get the amount of calls we have received in the past few days,” Moore said. “It’s never been this busy in my three years. Sometimes I even get service calls while I’m out on service calls.”

He said the frigid weather caused water in many pipes to freeze, resulting in expansion and cracks in water pipes. Once temperatures warmed up, many homeowners were surprised to find water gushing under or into their home, he said.

In the place of metal and plastic piping, many plumbers are installing PEX plumbing, which is flexible.

“They are less likely to bust,” Moore said. “Out of all the service calls I have been on, I haven’t fixed one PEX pipe yet.”

Moore’s company isn’t the only one seeing a monumental increase in service calls; nearly every plumbing company in Selma reported an increase.

Residential properties aren’t the only ones with shattered plumbing systems. On Wednesday, sprinkler lines in the former Teppers Building broke, flooding the basement of the building.

Selma Fire Chief Mike Stokes said water was leaking from the sprinkler system on every floor, resulting in approximately three feet of standing water in the basement.

“The water was flowing on all floors down to the basement,” Stokes said. “We had to go to the main cutoff in the basement to stop the water flow.”

On the hot seat: Local leaders of the Selma City School System are facing increased scrutiny from state officials after... read more