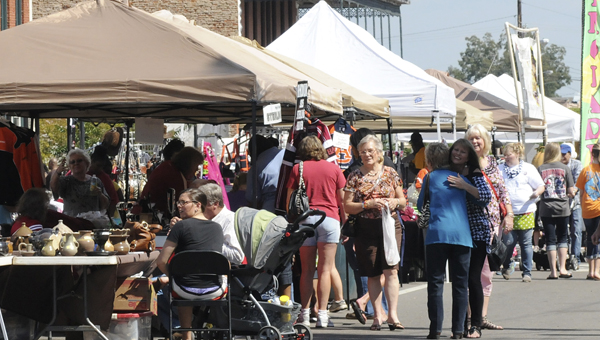 File Photo | Times-Journal
Lining the streets: Selma area residents walk Water Avenue during the 2013 Market Day Event. Market Day is one of several events that could be affected by a business license resolution.

A Selma City Council decision to set prices on vender and peddler licenses could have a negative affect on events such as Market Day and Holiday House.

The council will vote on a resolution that would set prices for peddlers and booths at special events. Currently, no ordinance exists for vendor licenses, according to Council President Corey Bowie.

The proposed prices for booths at events are $30 for the first day and $10 for subsequent days. The price is assessed per vendor or per booth. Non-store retailers, or peddlers, would be assessed a fee of $50 daily and $75 weekly. Bowie said he determined the prices after looking at cities of similar size.

“People should keep in mind that the prices we are putting in place are a lot lower than other cities our size,” Bowie said in December. “This is not an additional tax that we are trying to generate from anyone. We are simply trying to get what is due to us.”

Market Day is one event that would be affected by the license implementation. Though, Historic Preservation Society Member Candi Duncan said it already has affected the street festival.

“There will not be a Riverfront Market Day this year,” Duncan said. “Market Day did not make enough money back last year to have it this coming year. People were scared they would have to pay a business license fee and decided not to come.”

The new vendor’s license fees could also apply to Holiday House, a two-week fundraiser for the Old Depot Museum, which is owned by the City of Selma.

Individual vendors set up and sell various crafts, with 10 percent of sales going to the museum. Vendors are also currently required to pay a vendor fee, which is directed to the museum, according to Duncan.

Selma City Councilman Greg Bjelke said he is unsure if the resolution would apply to Holiday House.

“That is one of the things we have been wrestling with,” Bjelke said. “It is a charitable event, at the same time, the vendors are also making a small amount of money. We aren’t really trying to focus on those kinds of things though; what we are trying to do is focus on the people that spring up like mushrooms on street corners.”

If applicable, the resolution would tack on more than $100 for a vendor license.

Duncan agreed with Bjelke’s assessment and said it’s more important for the city to focus on charging out-of-town vendors rather than Selma residents, who are selling crafts to break even on a hobby.

At Thursday’s council work session, city attorney Jimmy Nunn said the resolution would exclude religious groups that hand out literature or solicit money and charitable organizations, meaning that churches wouldn’t have to purchase licenses for fish fry fundraisers or other events. Caterers at church events, like Lobster Fest at St. Paul’s Episcopal Church, may require a license, Bjelke said.

“I think it one of those things that has been overlooked,” Bjelke said. “If you are making money by selling a product and coming into town then you would need to get some kind of license.”

Two months after a suspect was seen on surveillance cameras breaking into Butler Truax Jewelers, authorities believe they have arrested... read more