‘No More’ campaign kicks off 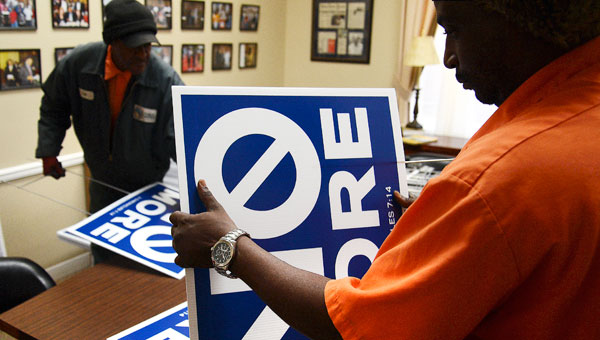 Selma Public Works employees Lee Barnes, left, and Marvin Lewis work together to assemble non-violence signs displaying the message ‘NO MORE’ on Thursday morning at City Hall. MAyor George Evans purcahsed the signs, and he has invited the public to display them around town. (Jay Sowers | Times-Journal)

The letters are bold and the message is simple; “NO MORE.”

Evans said Thursday the public response has been impressive since he first mentioned the idea of the No More campaign at Hunter’s funeral in late December.

“People have been calling and waiting signs, and I’ve already had several saying they would make donations,” Evans said. “My hope is that churches and business would want some to put in their windows or put in their yards.”

Evans said the signs can be picked up for free at city hall, but donations would help the campaign grow in the future.

“People can pick them up and we certainly appreciate any donations,” Evans said. “Donations are not required, but any money we get will go toward the purchase of new signs. I’m going to pay for all of these myself, either through my discretionary funds or through other money I just have, but I’m not going to turn anybody down if they want a sign.”

The one-sided yard signs were printed by ScreenCo of Selma, and ScreenCo manager Jeff Nichols said his company was honored to work with Evans to make the campaign a reality.

“It was really good to be a part of this,” Nichols said. “And so, we did what we could to put it at a price point that would be good for him and show him how much we supported this effort.”

Nichols said the signs were ordered Jan. 2, and delivered to the city on Tuesday of this week.

“We printed them as fast as we could. He really wanted them done as quickly as possible,” Nichols said. “We have printed 500 signs and there will be more ordered once those are all taken. We can supply what ever they need and we really support the mayor’s work on this.”

Evans said he planned to work with other local printing companies to create large banners that would also say ‘No More’, adding that one could be displayed over the main entrance to Selma City Hall.