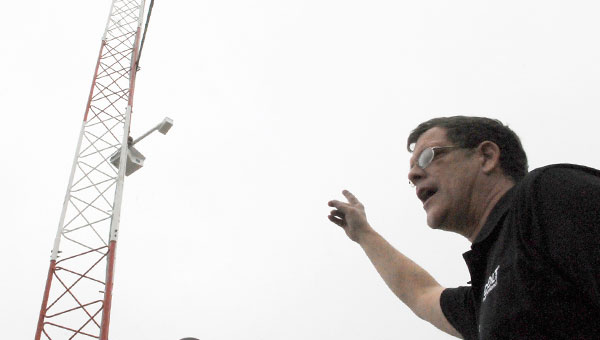 It’s called the ATM of weather and a Star Wars radar system, but to pilots, it’s another reason to fly into Dallas County.

Craig Field director Menzo Driskell, who nicknamed the system Star Wars radar, said he hopes it will lead to increased traffic and improve the overall quality of a flight to the airport.

“Our airport is on a scale with most of the commercial airports in the state; we can land almost anything that flies,” Driskell said. “It was something that we needed, especially because I see our airport as the new front door to Selma.”

The AWOS system sits adjacent to Craig Field’s 8,000-foot runway and can be accessed remotely, in a number of different ways. The most important way is by pilots, preparing to touch down just outside of Selma’s city limits, according to fixed base operations manager Richard Cook.

“Previously, you would have to use Montgomery weather, that was the nearest reporting station, which is a big difference,” Cook said. “You’d have to call into Selma and ask how the weather was. The system provides everything a pilot might need to figure out what the weather in Selma is like.”

“It provides up-to-the-minute details about the weather,” Corley said. “You might be able to get the weather before you take off, but it could change by the time you get ready to land.”

Though the system has only been installed for one month, Cook said the airport has seen a small uptick in traffic, with some pilots citing the system as a primary reason. An increase in traffic means increased fuel sales and more people spending their money in Dallas County, he said.

The new weather system is also part of a larger plan to continuously improve the airport’s facilities, according to Driskell.

He said the next improvement project will be replacing the runway’s lighting system in 2014.

Dallas Avenue bridge project on schedule for May 1 completion

Yancy Collins uses an air hose to blow dirt and debris from the deck of the bridge under construction on... read more