Dallas Avenue bridge project on schedule for May 1 completion 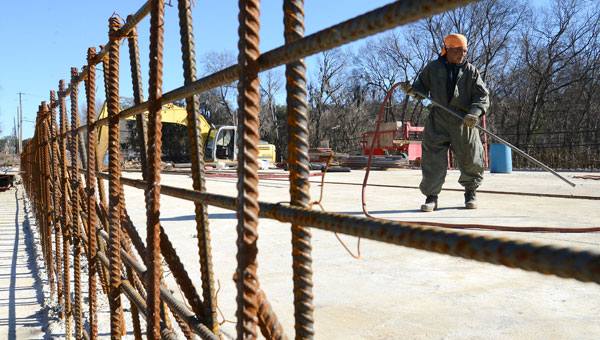 Yancy Collins uses an air hose to blow dirt and debris from the deck of the bridge under construction on Dallas Avenue Wednesday afternoon. (Jay Sowers | Times-Journal)

Rain showers in December and bitter temperatures in January have slowed the progress of crews constructing the new four lane bridge on Dallas Avenue, but workers remain positive they can meet their original May 1 deadline.

Rex Thompson, District Manager with the Alabama Department of Transportation, said most of the heavy lifting is done, and now crews will turn their attention to smaller projects around the main span.

“It’s pretty much on schedule right now. We just need some dryer weather,” Thompson said. “We’ve got the bridge up and the decks poured. We just need a break in the weather to get the drainage structures, sidewalks, inlets and curbs poured and then lay the asphalt.”

Danny Henderson, superintendent with Newell & Bush out of Montgomery, was on site Wednesday, and said the recent cold snap hasn’t affected the work as much as the wet terrain.

“Cold is not so bad as rain,” Henderson said. “It has to be 40 degrees and rising before we can do any kind of concrete work. We were a little ahead of schedule before but the rain over the last few weeks knocked us back a little bit.”

Henderson said it’s not unusual for a motorist or city leader to stop by the site and ask how the work is progressing, and said he reminds them the weather impacts the pace of the work.

“A lot of people will come up to the gates and ask us how it’s coming along,” Henderson said. “If the weather would cooperate, it shouldn’t take much longer. We are going to do our best to beat our deadline.”

Henderson said a crew would be on the site soon to begin the work of leveling off the ground at both ends of the bridge, after which, asphalt could be laid to connect the bridge with Dallas Avenue.