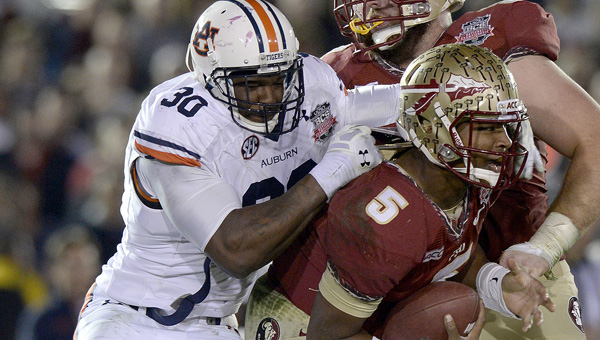 Locals gathered at the historic hotel to watch the championship game between the Auburn Tigers and the Florida State Seminoles.

Selma Mayor George Evans said the event provided an opportunity for locals to see the potential of the historic hotel.

“We are trying to market the hotel and getting people involved, by watching the national championship, is a way to show the St. James’ potential,” Evans said. “It’s an opportunity for people to come together, enjoy each others company and fellowship.”

As attendees enjoyed refreshments, each made their predictions about how the game would go. Some cheered for their home state though they were Alabama fans. Others, bitter from an Iron Bowl loss, reveled in the opportunity to see Auburn lose.

Dorothy Robinson, an Alabama alumnae, said she was rooting for the Florida State. Seminoles.

“Auburn and Alabama are just such bitter rivals and it’s not that I hate Auburn, but it would make me happy to say that Auburn was the reason that the SEC’s championship streak ended,” Robinson said.

Attendees were initially ecstatic, as Auburn jumped out to a 21-3 first half lead. After a successful fake punt and a Seminole touchdown, momentum seemed to shift and all but one person at the St. James began to lose faith. As Florida State continued to score in the second half, fans still held out hope that Auburn could pull off a last-second victory.

Once the Seminoles secured the final BCS National Championship, Kelvin Jones, the lone Florida State fan in attendance, was the only one celebrating.

“I can’t really even talk about how I feel,” Moore said. “It feels great to be the only Seminole fan in the house.”

“Florida State was second-to-none all season,” Moore said. “The last five minutes of the game told the story. I’m sad about Auburn losing as someone who is from Alabama, but I just don’t think Auburn had the stamina to come back and win at the end.”

Ice begins to form on the fountain in front of the St. James Hotel in downtown Selma Monday. — Tim... read more