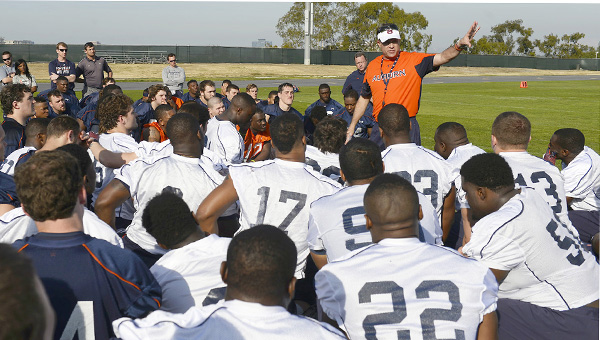 Selma city leaders are giving residents a chance to enjoy the most highly anticipated college football game of the season.

The city of Selma and Aaron’s are sponsoring a watch party for the 2014 BCS National Championship game, pitting the Auburn Tigers against the Florida State Seminoles, at the St. James Hotel Monday at 5:30 p.m.

This will mark the third time the city will welcome the public to an event that will allow them to enjoy the championship game as a community.

“It’s a means of people coming together to fellowship in a very wholesome environment,” Selma Mayor George Evans said. “I’m inviting the public to come out and fellowship and pull for a team that represents the state of Alabama.”

Big-screen televisions will be set up in the bar area and the Trunk Room of the St. James Hotel game night.

People can purchase food, such as chicken, fish and french fries at the bar. Some free snacks, including popcorn, chili and soda, will also be available to attendees.

Evans, who plans to cheer for Auburn, said although everyone might not be rooting for the same team, the fact a team from Alabama could possibly win the 2014 BCS National Championship game should overshadow any differences people have about teams.

“I know some folks like Auburn and some folks like Alabama, but now we are talking about the state of Alabama being a national champion again,” Evans said. “Sometimes we try to put aside our differences.”

Selma City Councilman Benny Tucker, who plans to attend Monday’s event, said he is an Auburn fan and is confident the Tigers will win the national championship. He also said it’s important for the community to come together at this event.

“Most people love sport, whether it be baseball, football, tennis or whatever,” Tucker said. “They love sports, so they’ll love the game.”

Effort aims to ‘heal our land’

The public is less than a week away from gaining access to signs that could possibly help reduce the rate... read more