SHS students head back to school, with one tragic exception 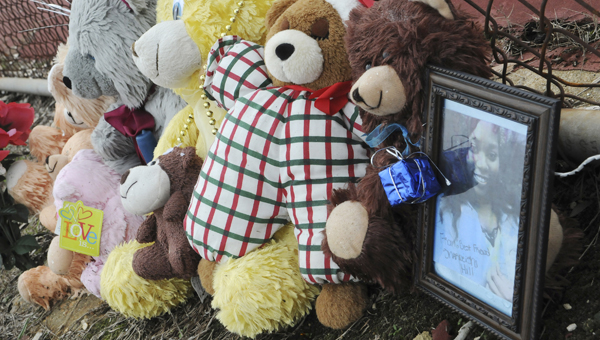 Far too young: Stuffed animals, photos, flowers and candles sit along the outside of the fence surrounding Selma High School’s tennis court as a makeshift memorial to Alexis Hunter who was killed just days before Christmas. —Sarah Robinson

More than two weeks after the death of Selma High School student Alexis Hunter, Selma City Schools are prepared to counsel grieving students when they return to school this week.

Counselors from R.B. Hudson, School of Discovery and Selma City elementary schools will be at Selma High School Thursday ready to help any students grieving the death of their former classmate Hunter, who was shot dead just before Christmas.

“I think it’s going to take a while for the students to get over it, if they ever get over it,” Selma City School Superintendent Education Gerald Shirley said before adding students were shocked by the news.

Selma High student Kamaya Moore said she was heartbroken when she learned about Hunter’s death. She said it’s still really difficult to deal with losing her best friend and fellow classmate.

“I was heartbroken,” Moore said when describing her first reaction to the news of Hunter’s death. “The first thing I did was cry, because my best friend was gone. I had just seen her Friday.”

Moore said that she relies on her mother to get her through the pain. Her mother often tells her that Hunter would want her to move on, Moore said.

“It’s still hard for me,” she said as she cried. “I can’t believe she is really gone. I [can’t] sleep without thinking about her. I can’t do anything.”

Moore said that it was Hunter’s smile and the good advice she gave to people that drew in so much love from her fellow students.

She said that Hunter, who aspired to be a beautician owning her own shop, had a unique smile, personality and wore outstanding hairstyles. Moore said several students at Selma High miss Hunter.

“She was always there for them,” Moore said.