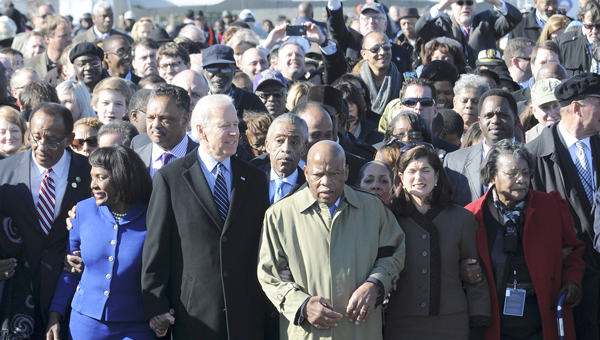 The stories range from tragic to celebratory, heartbreaking to heartwarming, sometimes all within the confines of the same story.

In this review, it is not our goal to rekindle harsh feelilngs, but rather document the events that shaped the lives we live and the community we call home.

With 2014 in its infancy, we want to wish all of you a safe and prosperous New Year.

Selma City Schools had a tumultuous 2013.

In May, school board president called for a full investigation of the system because of alleged sexual misconduct

Less than two months later, Selma High School teacher Latangila Williams was arrested and charged with three felonies and one misdemeanor in relation to sexual misconduct with a student.

Though the school board’s vote for an independent investigation failed, the Alabama Department of Education began in June to address the allegations. The department of education returned with a scathing report alleging more than sexual misconduct.

“They should have been stamped out when they first surfaced,” Department of Education chief of staff Craig Pouncey said after the investigation was released. “I think anytime there are allegations about students being mistreated one way or another, public school officials have a legal duty to get to the very bottom of it.”

The school board eventually passed a corrective plan, addressing the measures and continues to work to improve the system.

Vice President Joe Biden and dozens of other national, state and local officials made the trek to Selma to commemorate the 48th anniversary of Bloody Sunday.

“You all raised your voices and risked your lives for all those who were voiceless and in the shadows,” Biden said in a speech before the bridge crossing. “Like many other Americans, in other parts of the country, I was in awe of what you did.”

U.S. Rep. John Lewis (D-Ga) also marched in the ceremony. Lewis was one of the marchers beaten on Bloody Sunday. He stopped the march at a point where he and others were attacked and detailed his account of the event.

“When we got to the highest point on this bridge, down below we saw a sea of blue of what was the Alabama State Troopers,” Lewis said during the bridge crossing. “We kept walking; we came within hearing distance of the state troopers. A man said, ‘I am Maj. John Cloud of the Alabama State Troopers. This is an unlawful march and will not be allowed to continue. I give you three minutes to disperse and return to your homes or to your church.”

Tragedy struck Selma in a way many hoped the city would never see.

Selma high junior Alexis Hunter, who had just turned 18, was slain behind the high school while on her way back from walking around a track with friends.

After Jones allegedly shot Alexis Hunter in the head, Jones and Larry Hunter chased two other girls, who were walking with Alexis, and stole one of their cell phones.

The murder sparked outrage across the Selma community. Some called for justice to be served, while others simple tried to comprehend how such a tragic event could happen to such a well-liked girl.

“She was a well-rounded, pleasant person to see in the morning to kind of make it great for the rest of the day,” Selma high teacher Patricia Farrior said. “She’s going to really be missed.”

On Tuesday, Jan. 8, a woman, clad in black, crossed the railing on the Edmund Pettus Bridge and leapt into the waters of the Alabama River.

After realizing what had just occurred, Auburn graduate student Doug Bacon, 29 drove to the Selmont side of the bridge, jumped in the river and swam out to rescue her. Upon reaching the woman, Bacon said she was still breathing.

A few weeks after the successful rescue, Bacon received an award for his heroism from the Selma Police Department and Selma Fire Department.

“I was happy to help,” Bacon said when accepting his awards. “It makes me feel good to help and I appreciate this and all your thanks and gratitude.

After Gourmet Services LLC ended its five-year management contract after only six months, the city assumed control of the St. James on Aug. 1.

A number of volunteers and two general managers have operated the hotel since. The hotel has generated approximately $14,000 in revenue and had $39,000 in expenses. The city also transferred $25,000 to help run the hotel.

City officials initially aimed to decide the future of the St. James by the end of 2013 and are currently reviewing management proposals. Proposals include: Michael Roberts, a self-made millionaire from St. Louis; Rev Par Management, based in North Carolina; Strand Management, based in South Carolina; Taylor Baxter, a student at Auburn University—Montgomery; and Christopher Peirera, from Tuscaloosa.

The Concordia College Alabama football team lost thousands of dollars in equipment in September when the team’s bus burst into flames on Alabama Highway 219.

The team was headed to Miles College in Fairfield for a game, when a tire blew out, according to East Perry County firefighter Patrick Essex.

After the incident, donations came pouring in from around the country to help the team get back on the field.

The Forrest monument is located in Oak Like Oak Cemetery on a one-acre tract of land called Confederate Circle.

To avoid paying thousands of dollars in fines, the city reached a settlement that included giving a tract of land to Chapter 53 of the United Daughters of Confederacy and preventing the monument from being raised higher.

One final step remains before the settlement become official. The city council must approve ceding Confederate Circle to the United Daughters of Confederacy and pay $50,000 to KTK Mining.

Officer kills two, then kills himself

A Selma police officer reportedly killed his ex-girlfriend, her stepfather and then turned the gun on himself, committing suicide Sunday, June 2.

Dwight Moorer was a five-year veteran of the police department.

Police discovered the body of the step-father at a home on the 300 block of 10th Avenue. Moorer and his ex-girlfriend’s body was found on the 2400 block of Springdale Street. All victims were pronounced dead at the scene.

“This is a terrible and tragic situation,” Chief of Police William Riley said at the time of the incident. “All of our hearts go out to the victims and the families involved.”

J.L. Chestnut Jr. Boulevard and Crescent Hill Drive picked up some extra traffic in 2013 as motorists were forced to avoid West Dallas Avenue because of ongoing bridge construction.

The Dallas Avenue Bridge was built in 1927. The Alabama Department of Transportation said construction was a part of routine replacements.

Though motorists were initially nervous about the effect of the detours, traffic on J.L. Chestnut has only seen a small spike.

“A certain times of the day, traffic does get pretty bad on Hooper Drive and Cahaba Drive, but right now, everyone is just dealing with it,” Selma Police Department Sgt. Roy Nix said.

The construction began in July and is scheduled to wrap up in summer 2014.

Selma mysteriously missed out on more than $500,000 in sales tax during 2013 and as a result switched sales tax collection agencies from Revenue Discovery Systems to the Alabama Department of Revenue.

For months, sales tax revenue continuously came up short of the previous year. At one point, Selma Mayor George Evans estimated the total shortage to be $500,000.

Selma City Councilman Cecil Williamson said he was unsure of the reasoning behind the decrease, but said he is happy to finally be getting the money owed to the city.

“This year (2013) was just either the worst year economically Selma ever had or one of the largest rip-offs the city has seen,” Williamson said.

— The list of top stories from 2013 was compiled by the Times-Journal staff.