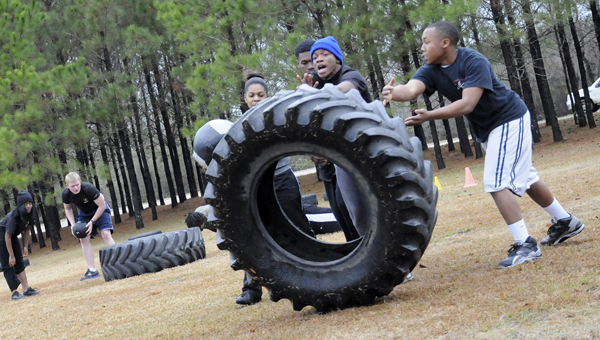 A group of more than 30 gathered at Selma Crossfit for their regular physical training routine. Many of those taking part in Monday’s training, all of whom were from Dallas County, are awaiting basic training and advanced individual training — training required before officially becoming a soldier. A select few had already completed their initial training.

Army recruiter Staff Sgt. Joe Strobaugh said he chose to have the workout at Selma Crossfit because it is known as a high-intensity workout.

“The fundamentals of Crossfit are high-intensity, interval training,” Strobaugh said. “Branches of the military have been using Crossfit for years. If the best of the best are doing it, isn’t that something you want to be associated with.”

The soldiers began with three sets that included running, 10 pushups, 20 sit-ups and 30 squats.

Some of the young soldiers got off to a quick pace and fell behind, while others maintained a steady pace and finished strong.

As the soldiers finished the first part of the exercises, a slight, cold mist began to fall. More exercises were to come. The second part split the soldiers up into teams and required them to flip a tire then run a lap around the field, all while not dropping a medicine ball weighing 10 pounds.

Strobaugh said he split the soldiers into teams as a form of training for their Army specialties.

“It was hard to do that first set by yourself wasn’t it?” Strobaugh asked those participating.

Strobaugh said he tries to see his soldiers at least once per week, whether it’s just a quick conversation or for physical training.

Two teenagers are in jail and one is dead after a robbery and shooting late Saturday night on Franklin Street.... read more