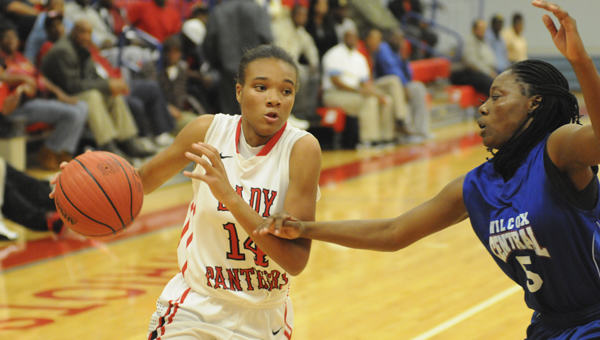 Southside’s Ki’Onna Likely dribbles the ball up the floor in the Panthers game against Wilcox-Central Thursday night. Likely scored 22 points in the game to lead all scorers.–Daniel Evans

Trailing by eight with 3:07 remaining in the game, the Panthers’ Ki’Onna Likely stole the ball for a layup and then made a three-pointer to make the score 38-35 Wilcox, but Southside was unable to get closer.

“We had been playing flat the whole game even though we did take a little lead in the first quarter,” Southside head coach Jason Bothwell said. “In the second half, it was all about playing with heart. We didn’t play with a lot of it until it was too late.”

Wilcox Central’s Laquisha Jones scored the final six points for the Jaguars, who pulled away for a nine-point win.

The Jaguars led the game 17-15 at halftime and jumped out to a 31-17 lead with 3:26 remaining in the third quarter. Likely and Calvondrea Blackmon helped the Panthers finish the quarter on a 10-1 run, but Wilcox was able to stretch the lead again and then hold on in the closing minutes.

“I think it was a humbling game because we got a little beside ourselves because we got up 2-0 in the area, so we kind of came into this game relaxed,” Bothwell said. “That’s a cardinal sin.”

Southside is still looking for more consistency on offense.

“Our half court offense is slow,” Bothwell said. “We do try to slow the pace down but sometimes we have to recognize and realize where we are and the positions we are in.”

The Jaguars led 18-4 after the first quarter and never looked back, methodically pulling away in the second half.

“We are young so we were working on some things for down the stretch,” Southside head coach Cedric Brown said. “This game is no indication of how good or bad we are.”

The Jaguars took a 37-20 lead into halftime but quickly extended it.

Wilcox started the second half on a 13-2 run and by the time it was over the outcome of the game was no longer an issue.

Wilcox Central ran a full court, man-to-man defense nearly the entire game and it forced Southside into a lot of mistakes.

“Our defense played a big role,” Wilcox Central head coach Mark Dukes said. “We extended the defense full court. It seemed like our press caused quite a few problems for Southside.”

Brown was ejected in the second half after picking up a second technical foul, but he was proud of the way his guys competed the entire way.

“My young guys fought real hard and played until the end and that’s all I can ask of them,” Brown said.

Jevon Hall led the Panthers in scoring with 16 points.

Morgan’s Dalton Lee (10) goes for a layup against South Choctaw’s Dillan Clark during a game at the Morgan Pepsi... read more