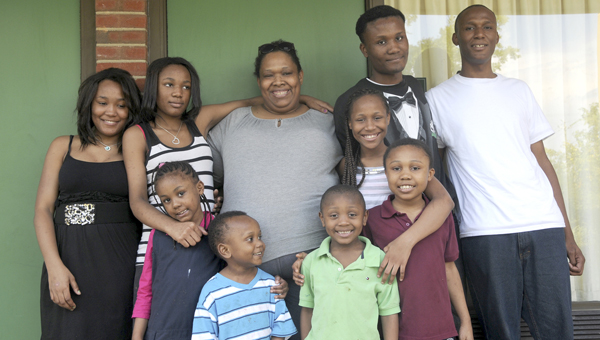 The Thomas family stands outside of their hotel room at the Selma Hotel in September. The hotel served as their temporary home after their house burned down on Sept. 8 — Josh Bergeron

Nearly three months after Mary Thomas and her nine kids were forced from their house by a fire, Thomas died while giving birth to her 10th child.

The family was sitting down to have dinner when a short in an electric blanket caused a fire in the house, located near Sardis. Two of her children were airlifted to the hospital as a result of the fire.

“I had to be rushed to the hospital because I am expecting the tenth child and got a lot of smoke in my lungs,” Thomas said after the incident. “We were already having a difficult time doing things, but this made everything worse.”

The Edmundite Missions and Selma Red Cross provided aid to the Thomas family for a short period of time, but once aid ran out, the family was left wondering where to go.

They were stuck, not yet homeless, but without a place to call home.

Thomas’ aunt Angela Martin said the family returned to the house near Sardis and began cleaning out the scorched remains of a place the family once called home. The family was in the process of restoring the house to an adequate condition when Thomas went into labor last week.

“We were just kind of playing cards and hanging out,” Martin said. “The girls were especially excited. We found out that she had passed away when the doctors came into the room. He was trying to explain that they did the best they could, but before he could even finish, the oldest daughter just kind of lost it.”

Martin said she tried to stay calm and collected after finding out the news.

“The adults just had to stay strong because all of the children were around,” she said. “I just kind of was sitting there looking straight ahead, but some tears did come out.”

Though Thomas died during childbirth, she gave birth to an 8-pound baby boy — George Thomas. Martin said doctors are keeping the newborn George in the hospital due to his health.

Martin said the husband Rufus Thomas is continuing to renovate the house. The family is taking donations to help pay for the funeral through Miller Funeral Home.