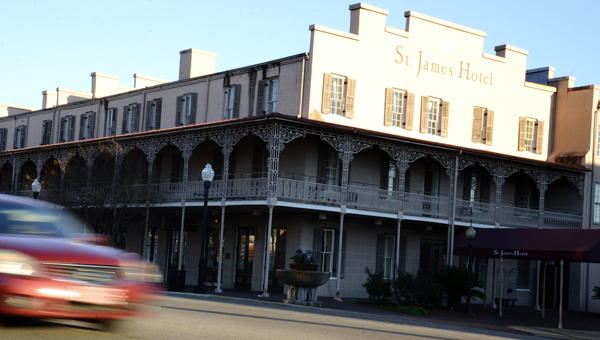 Going once, Going Twice: Traffic moves along Water Avenue past the historic St. James Hotel on Tuesday afternoon. Several companies have expressed interest in operating the hotel that is currently owned by the city of Selma and staffed by volunteers. — Jay Sowers

Selma officials inched closer to choosing a suitor to run the St. James Tuesday after reviewing proposals for the future of the historic hotel.

On Dec. 9, the city sent out a Request For Proposals with the intent of selecting a team for design, renovation and operations of the hotel and a proposed conference center. The city received seven responses — some were submitted before the RFP was posted.

Though the RFP doesn’t expire until Jan. 3, the St. James committee reviewed seven proposals in the city council chambers, offering criticism and complements on each.

“Are we going to continue to just let it stay in cruise control and hope for the best or are we going to get somebody in there that is truly a true hotel person?” Selma-Dallas County Chamber of Commerce director Sheryl Smedley asked.  “It’s very embarrassing when we have people call the chamber of commerce and want to stay at the St. James Hotel and this is the first time since I have been the executive director that I can truthfully recommend to that person that yes you will have a nice stay there.”

Five of the seven proposals were previously presented to the city council at the Dec. 11 meeting — RevPar Management, based in Cary, N.C.; Roberts Hotels, based in St. Louis, Mo.; Strand Management, based in Myrtle Beach, S.C.; Taylor Baxter, a student at Auburn University—Montgomery; and Christopher Peirera, from Tuscaloosa.

Planning and Development director James Benderson declined to provide the remaining proposals because the list hasn’t been finalized.

Strand Management, a third-party management group, proposed a contract of a maximum of three years for $4,000 per month plus 3 percent of profits.

Peirera’s proposal includes marketing and crisis management for 90 days at a cost of $50 per hour.

Baxter’s proposal would be an internship at a cost of $15 per hour. He would work 26 to 30 hours per week and is requesting an additional 56 cents per mile for travel costs, according to the proposal.

One of the committee’s major concerns was the willingness of a lessee or manager to make a long-term commitment to Selma.

Committee chairwoman Susan Keith said she would evaluate each prospect by checking into financial backgrounds, staying at hotels owned by the management groups and making calls to local officials.

More submissions are coming, according to Benderson. He expects three additional proposals before the Jan. 3 deadline.

“That group invests not just in the hotel, but the community that he goes into, that’s the impression I get,” Keith said. “That’s the one I’m leaning toward.”

Keith said she also liked the proposal from Strand Management.

“The city isn’t looking to hire just another employee,” she said. “That’s the same as what we’re doing now.”

The hotel is currently run by volunteer general managers Nancy Smith and Patty Sexton and a few part-time employees. Sexton and Smith assumed their roles as general managers in August after Atlanta-based Gourmet Services LLC left the hotel six months into a five-year contract. Since August, the hotel has generated $14,000 in revenue with expenses totaling $39,000. The city also transferred $25,000 to the hotel to supplement income.

With Benderson expecting more proposals, an evaluation of interested parties may have been premature. When asked why the council didn’t wait until all proposals were submitted, Keith said she was unaware of the RFP deadline.

“I should have been informed when the RFP went out,” she said after the meeting. “I was waiting for some direction. I guess I should have just held meetings to stay in the loop.”

Multiple prospects toured the hotel previously, according to volunteer general managers Patty Sexton and Nancy Smith, but Keith said she was unaware of any previous tours.

City officials aimed to make a decision on the hotel by year’s end initially, but Keith said no deadline currently exists.

“I want to do it as expediently as possible, but I don’t want to be in such a hurry that we don’t do our due diligence,” she said.