Pets are friends, not gifts 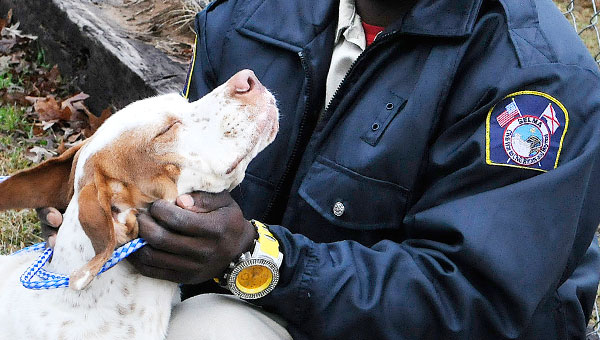 Anthony Smith, a caretaker at the Selma Animal Shelter, exercises one of the many pets available for adoption at the local animal adoption agency. (Sarah Robinson | Times-Journal)

As sweet and adorable as the gesture of wrapping a small pet in a bright red or green ribbon and giving it to a loved one as a surprise holiday gift may seem, it’s not the best idea.

Animal adoption agencies and veteran hospitals are either completely against the thought of giving pets as gifts or strongly encourage people to consider a few things before making that decision.

“Throughout the nation there is a flood of animals that were adopted at an animal shelter that go back following Christmas, because people aren’t prepared for the responsibility or maybe didn’t want the pet to begin with,” Frances Kendrick, the owner of Valley Creek Veterinary Hospitals, said. “It’s not a good surprise gift to give a pet.”

Kendrick said that people should make sure that the person receiving the pet as a holiday gift is truly prepared to take on the lifetime commitment of owning an animal.

“Some people are not ready for have,” Kendrick said. “When you are adopting an animal, you need to think about if you are committed to having an animal for the next 10 to 15 years, because some animals can live to be 15 years or more years old.”

Kendrick also said that people considering giving animals as gifts should make sure that those getting the present will be able to withstand the financial expenses that come with having an animal.

“Pet food and veterinarian care needs to be figured into the whole idea,” Kendrick said. “The initial first purchase of a pet is a small amount compared to what it will cost over the lifetime of owning the pet.”

People should also make sure the soon-to-be owner would be able and willing to exercise their new four-legged friend, Kendrick said.

For the Montgomery Humane Society, giving a pet as a gift isn’t an option.

“We don’t adopt out pets for gifts if we know that is that is what it is going to be for,” Cindy Chapman, the volunteer coordinator at the Montgomery Humane Society, said.

Chapman recalled a time when someone adopted a dog as a holiday gift for someone else, and the organization didn’t know the dog was later going to be given as a pet.

“A boyfriend gave his girlfriend a Chihuahua for Christmas,” Chapman said. “She promptly returned him, saying that she didn’t like the Chihuahua. She would rather have a dog that was fluffier, more like a Pomeranian or a Shih Tzu.”

In order to avoid similar situations, the animal adoption agency makes those that plan to own the pet fill out an application and get approved before letting them adopt a pet from the Montgomery Humane Society.

“For one thing, we don’t adopt out cats that are going to go outside,” Chapman said. “If they live in an apartment, we have to speak with the apartment manager to make sure that it is okay for them to have a pet.”

She said that it is vital people perceive pets as living creatures and not an inanimate object.

“It’s a life. It’s not an object, possession, or something material. It’s a living breathing thing.” Chapman said. “It really is a personal decision. Someone needs to come and choose their own pet.”