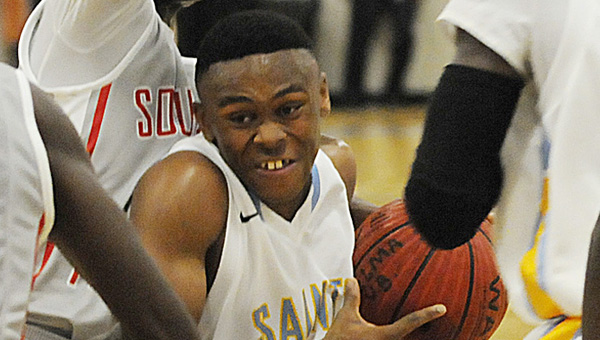 Selma’s Alfred Robinson fights through traffic in Saturday night’s victory against Southside. The Saints held on for a 47-44 win.–Daniel Evans

One night after losing a close road game, Selma withstood a large second half run by county rival Southside Saturday night for a 47-44 win.

The Saints led 27-18 in the second quarter, but Southside nailed four three-pointers in the third quarter to take a 38-35 lead.

Selma battled back, outscoring the Panthers 12-6 the rest of the way. Kahmaul Jones scored six of Selma’s 12 points down the stretch to lead his team to the win.

“We didn’t play as good as should have and as good as we can play but it is a win,” Selma head coach Woodie Jackson said. “A win is a win and we definitely needed that.”

Jones led the way for the Saints, scoring 13 points and Keyshawn Ford added 11.

The Saints needed nearly every single point, because after a slow first half the Panthers’ offense started rolling.

One night after being held to just 24 points in a 35-point loss to Dallas County, the Panthers scored only 12 points in the first half Saturday night.

But in the second half Southside’s offense came to life, thanks to three pointers by Jevon Hall, Jhlanadius Sullivan and Christopher Williams in the third quarter.

“To bounce back from last night and that first half, the guys really performed,” Southside head coach Cedric Brown said.

“Right now we are a one half team and we are looking to play four quarters. I applaud the effort. It was a much better effort than last night.”

In the end the Panthers rally fell just short, because the Saints defense buckled down in the closing minutes to close out the win.

Southside was led by Hall, who scored 14 points, and Derrick Daniels who added 12.

Both teams play on the road in their next game. Southside plays next at Excel Tuesday, Dec. 10. Selma’s next game is Dec. 13 at Sumter Central.

The Panthers scored only two points in the first quarter as Selma’s suffocating defense controlled the action, but Saints head coach Anthony Harris said his team needs to continue to improve.

“We came out a little sluggish,” Harris said. “It took us about three quarters to get into the mix of the game tonight. We’ve got to be more disciplined in running our sets on offense and playing good defense.”

For the Panthers, head coach Jason Bothwell knows there is still a lot of work to be done.

“It is a process of continuing to work,” Bothwell said. “It is our fifth game of the season and we are still working.”

Kionna Likely led the Panthers with 11 points. Areyanna Williams led the Saints with 20 points and 14 rebounds.